Review: My Life as a Hashtag by Gabrielle Williams 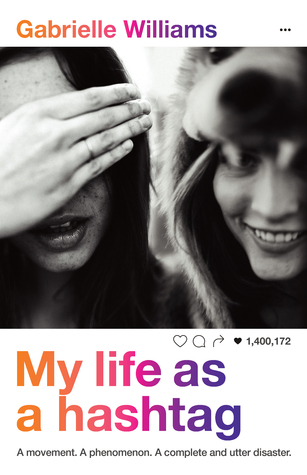 My Life as a Hashtag is a realistic read about how one mistake can lead to a whole lot of hurt, heartache and humiliation. MC (otherwise known as Marie-Claude,) is sixteen years old and is in the midst of a pretty stressful time. Her parents are divorcing and her father is already in a relationship with another woman. Her brother has become withdrawn, while her mother is busy trying to meet men on tinder. To add to the mix, MC is a scholarship kid at a top Melbourne private school. The girls she hangs around with are probably better described as frenemies than her besties, particularly Anouck who treats MC more like a rival and a potential threat than a friend ... because that is precisely what MC is to Anouck, though MC is most ignorant about how her behaviour affects others, rather than being an outright bitch. It's a fairly realistic take on female friendships at that age, where one's closest friends can also be their worst enemies, and where someone can genuinely be ignorant of the hurt that their actions can cause. And, of course, where that hurt can be taken completely out of proportion. Anyway, things come to a head between MC and Anouck first over a boy, and then over MC not being invited to a party that is being hosted by Anouck. MC gets her revenge in what she thinks is a clever but anonymous post online. The post goes viral and both MC and Anouck find their lives being invaded in a way that neither girl thought possible ...

While the possibility of such a post going viral seems very remote, and the fallout is quite harsh, what this story has in bucketloads is a very realistic take on female rivarly, and teenage culpability. MC is portrayed as someone who is genuinely ignorant of her actions--she's not necessarily a bully who set out with an intent to hurt someone. She's a kid who is hurting, who has few people she can lean on for support, and who vents the only way she knows how, using the resources that she has available. Her actions are those of someone who doesn't know any better, and her experiences lead to some pretty harsh life lessons. As for Anouck, she's no angel either, though the way she stands up to her mother in the end--and the way that she listens to MC's apology--certainly suggest some newfound maturity on her part.

This is an enjoyable realistic read. My only complaint is that the book is going to date very quickly due to its reliance on technology--a pity considering how well-drawn the characters and situations were.

Gabrielle Williams My Life as a Hashtag