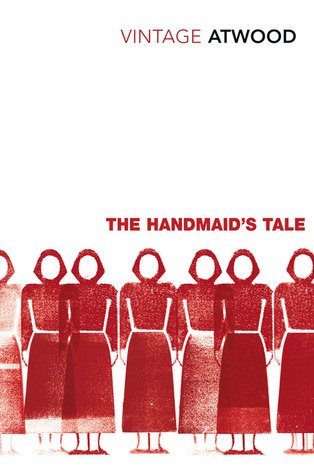 Writing a review of The Handmaid's Tale in a time when it seems that there is nothing new or original that can possibly be said about Canadian author Margaret Atwood's brilliant dystopian is one hell of a challenge. Thanks Trump, for creating an era that gives everyone cause to worry, and thanks to everyone who created or watched the recent television series. Oh, and thanks everyone else who has given this novel the reviews it deserves since it was released in 1985.

No, I'm not bitter about it. The Handmaid's Tale is an brilliant novel and deserves all of the praise and discussion that it has received.

The novel is set in the United States, in what was, presumably, the near future after the novel first went to print. The United States is now known as Gilead and, following war, is now run by a strict Christian fundamentalist regime where women have no rights--women are no longer permitted to read, to have ownership of anything and they are broken up into various roles according to their ability and lot in life. Some women are maids, others are wives, some are Aunts (unmarried, older women whose role it is to govern the others,) some are sent out to clean up the colonies and others, like, Offred, the main character are sent to the homes of wealthy men so that they may bare them children. Offred had a name before the changes took place, but now she belongs to the man of the household where she must stay. She has literally become "Of Fred." (There are also characters called Ofglen, and Ofwarren.) Separated from her husband (her marriage was deemed invalid as it was her husband's second marriage, and her daughter, Offred lives an unhappy existence and does what she can to survive it, which eventually leads to some situations that have more than a touch of black comedy about them. Through flashbacks we learn about Offred's life before becoming a handmaid--in particular her friendship with Moira, a spirited young woman who refuses to let the aunts break her.

And, of course, the totalitarian government of Gilead uses a few carefully chosen passages from the bible to justify all of this.

What really shines about The Handmaid's Tale is how cleverly it demonstrates how the women of the novel cope with their circumstances and the risks they take just to survive. Perhaps the most frightening thing about the novel, however, is how easily something like this could happen. It's not beyond the realms of fiction that--given the right circumstances--that women could find their rights taken away. (After all, in The Handmaid's Tale, all the government had to do was freeze all of the women's bank accounts and make it illegal for anyone to employ women.)

This one is definitely worth a read or, if you've read it before, a timely second look.
Margaret Atwood The Handmaid's Tale