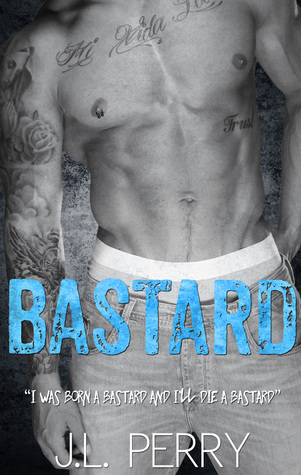 Bastard is one of those self-published success stories, where it was initially self-published as an eBook and then became so popular that it was eventually picked up by a major publishing house, and then went on to have even more success. Even better, the author is Australian, and the book is set in New South Wales. Bastard is a trashy romance, the kind that is unashamed of and perhaps even revels in its own trashiness, with plenty of swearing, explicit sex, sexism disguised as romance. In fact, there is probably something in there to offend practically everybody. The writing itself sets a fairly low benchmark, though it has an easy to read and, dare I say it, a slightly addictive quality about it. And, let's face it, people don't pick up a book like this because they are expecting an eloquently written, chaste read with a realistic storyline. It seems almost ridiculous that I am making a judgement about it at all. (I actually picked up my copy after I spied a couple of uni students reading sections out loud at my local bookstore and having a good chuckle. I guess that I am a bit of a well, bastard, because I wanted to know what the joke was. Plus I always think it's good to get out of my reading comfort zone every now and again and try something new, and this one didn't seem particularly difficult or intimidating.)

The novel tells the story of Carter, who was born to a nineteen year old single mother, whose wealthy parents had kicked her out of home. His mother, Elizabeth, is a kind and loving woman who only wants the best for her son, but Carter's life is scarred forever when he encounters his grandfather for the first (and only) time and the old man rejects him on the basis that he was born out of wedlock. Fast forward to 2010 and Carter is seventeen and a half years old. He's a teen who enjoys acting mean, and he's having plenty of run-ins with his mother's new husband, a man who appears to have no redeeming qualities whatsoever and what Elizabeth saw in him remains one of the novel's greatest mysteries. Anyway, a new husband for Elizabeth means a new house for Carter, and he finds himself unwelcome in his new home in the Sydney suburbs. Fortunately, just next door is Indi, a lovely sixteen year old girl and her father, Ross, who is the local policeman and is also quick to see the good in Carter, and to treat him like his own son. (And he certainly calls Cater "son" often enough within the narrative.) Unfortunately Indi doesn't like Carter much at first and the two spend much time trying to stir one another up until, inevitably, romance blooms. But it might just take a few years, a tragedy and some steamy hot sex for this pair to get together ...

Bastard is an addictive and slightly over the top romantic read that delivers everything that it promises on the cover. My grumbles about this one are that parts of the story did not much depth to them, and some of the plot devices were a little too obvious. Despite the novel being set in Sydney and Newcastle, much of this story seemed to have an American quality about it--for example, Indi is said to have gone to College instead of uni, and early on there is a scene at the high school, where they all seem to be eating lunch at in cafeteria like arrangement. And, as is often the case with books in this genre, Carter proves how much he cares by controlling as much of Indi's life as he can. However, I did enjoy the ending (it was nice to see two other deserving characters get married,) and parts of this story read like a lovely, escapist fantasy.