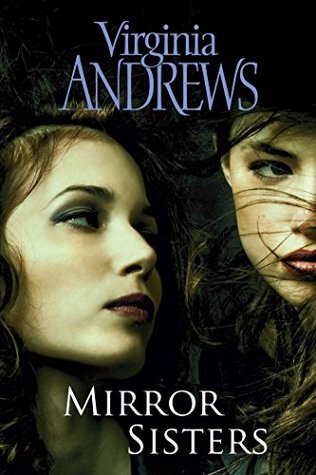 The latest effort released under the name of long deceased gothic novelist Virginia Andrews is a lacklustre, repetitive tale of sibling rivalry and twisted parenting that is slightly redeemed by a surprising twist at the end. Kaylee Blossom Fitzgerald and Haylee Blossom Fitzgerald are identical twins, living under the iron thumb of their obsessive, perfectionist mother. Mother will go to any length to ensure that both of her daughters are identical in every possible way, fighting against human nature and her husband's not unwarranted concerns about the way his daughters are being raised. Unsurprisingly, this causes both twins to resent one another quite deeply, especially as they are developing radically different personalities. Kaylee, our narrator is the good twin, who wants to break free of mother in a careful, mature way. Haylee, meanwhile, is the reckless twin who resents her sister's cautious nature, and just bloody well wants freedom--despite the cost, and the fact that she has to resort to some pretty damn nasty lengths to get it. The first half of the story is extremely repetitive and gets boring after a while--what would have been pleasant reading in a prologue, or a first chapter, becomes an annoying series of anecdotes about how obsessive Mother is, how weak Daddy is, and how Kaylee and Haylee desire to be different to one another. Kaylee is a good kid who sees a potential steady boyfriend in Matt, a boy from her school who seems more emotionally mature than most of the kids in their class. As for Haylee, she seems to be pre-occupied with two things--proving that she is different from Kaylee, and well, everything and anything that is even remotely associated sex. (If Haylee seems familiar to fans, it's because Kaylee isn't the first VCA heroine to have a nymphomaniac twin. Ruby Landry suffered a similar problem with her nasty twin sister Gisselle.)

The Mirror Sisters has a few good moments (especially that ending,) but, sadly, it is let down by too much repetition, weak characters, too much repetition, a lack of depth and too much repetition. (See what I did there.) The characters don't seem to have much motivation for their actions, other than them being 'good' 'bad,' or 'obsessive.' (Look! Haylee just slept with Kaylee's boyfriend, whilst pretending to be Kaylee because she is a ba-ad girl.) A good melodrama, in my opinion, should pan out with readers discovering that there is a greater reason (no matter how absurd,) for the actions of its characters. For example in Flowers in the Attic, much of Olivia's cruelty was driven by jealousy and a need to control everyone and everything around her ... lest people find out that she is a weak woman underneath who only wants to be loved.

Another factor lets the book down and that is the sheer abundance of semi-explicit sexual content that is neither erotic, amusing or enjoyable to read. In fact, I'm going to come straight out and say it--most of it is damn uncomfortable, and not in an ooh-err I'm far too prudish to read that kind of a way. Neiderman has a reputation for grossing out readers (in Rain a minor character is forced to wear rubber underpants by his mother, and ejaculates more or less a few seconds after taking them off,) or creating scenes that are unintentionally funny (the term "Crossing the Rio Grande" became a talking point among fans after the release of Secrets of Foxworth for all the wrong reasons,) and there have been countless trashy moments where the heroine has been raped, almost raped or molested by the people who are supposed to take care of her. (Particularly Melody Logan, who, it seemed could barely leave her bedroom without someone coming on to her.) What we get in The Mirror Sisters is something that is lower than trash. Actually, it's just unnecessary. And gross. (And did I mention gross?) On page 130 there is a scene where, unprompted, the twins mother tells her twelve year old daughters about cunnilingus--and then oral sex is never mentioned again anywhere in the narrative. Later in the novel, sixteen-year-old Haylee brags of stealing "one of those vibrators" from her friends mother. (As though someone of Haylee's age who has such an apparent interest in sex would not one, simply describe it quite nonchalantly as a "vibrator", and two, know how and where she could obtain one without having to resort to theft. Not to mention the fact that she probably would have done so some time before her sixteenth birthday.) Meanwhile, Haylee's sexual behaviour itself appears to have no obvious motivation--it's a far cry from Vera Adare from My Sweet Audrina, or Fanny Casteel from the Casteel Saga, whose precocious sexual behaviour, stemmed from being sexually abused as children. (Look closely within the narrative. It's there.) Haylee, meanwhile, fucks at every opportunity and uses it as a means to bully her innocent sister for no other reason than entertainment.

The mother is a weak character--her interest in keeping her twin daughters identical in every possible way (she even claims that they have the exact number of freckles,) is never made clear. Like every wealthy female in every book ever penned by Andrew Neiderman, she is shallow, vain and possesses one, a deep seated hatred of men and two, no redeeming features whatsoever.

The ending is quite interesting, though--not only does it end on a cliffhanger, but it certainly was not what I was expecting. Let's just say that Haylee finds quite a novel way to get rid of her sister once and for good ...

My copy contained a preview to the next book in the series, which is narrated by Haylee, and appeared a little more interesting than it's predecessor, though whether it will be interesting enough for me to read it remains to be seen.