Review: Hot or What by Margaret Clark 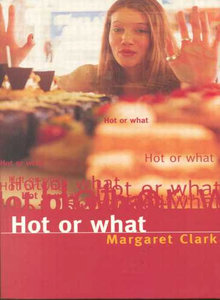 Hot or What is one of those rare teen novels that makes me want to whoop with joy--its a book with a simple plot, a loveable lead character and brilliant writing that never takes itself--or anything else--too seriously. Lisa Trelaw is a good kid from Melbourne who has been plucked from the obscurity of her mother's snack van to work as a fashion model for one of Sydney's top modelling agencies. Reinvented as Rebel, Lisa finds herself living a crazy life that she neither likes, nor respects. She finds much of her new world too superficial, but a friend in a very high place (one of the nations former top models and now an esteemed businesswoman who is looking for an Australian model of the year,) may just be the person to turn that around and show Lisa just who and what she has the potential to become ... (and how to stay sane in such a crazy industry.)

This book was originally published in 1995, a time when being a model for a fashion magazine was big business, and when supermodels were considered among some of the most famous and important people in the world. Of course, some things have changed since then--technology, attitudes--but the book, and it's big heart, holds up pretty well. And despite the fact that I had not read Fat Chance, the first book in the series, I was able to follow the story perfectly.

PS If the name on the front cover sounds familiar to any 1980s kids out there, it's because Margaret Clark was also the author of best selling teen novel Pugwall.