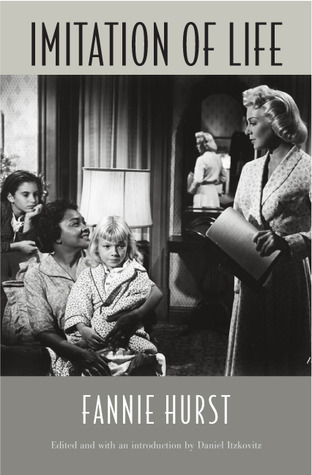 Although I am very familiar with the 1959 movie of the same name, until recently I was completely unaware that it was based on a book that had been written some years earlier. And then, when I found a copy of the book, I was in for a bigger shock. Unlike the film, which examines racism and mother/daughter issues, in a soap opera like fashion Fannie Hurst's Imitation of Life is, at its heart, a feminist novel that offers a chilling message--that women cannot have it all.

The novel tells the story of Bea Pullman, a young woman who was forced by economic circumstances to marry a man many years her senior and soon finds herself a widow and young mother with a ailing father to look after. No one will give her much of a chance, and her only income is through selling maple syrup and things look pretty desperate, until Delilah comes along and helps Bea to reshape her business. The pair enjoy a long and successful business relationship that lasts right up until Delilah dies, but much of their success is at the cost of their relationship with their daughters. Bea's lover runs away with her daughter, while Delilah's problems are much more complex--while Delilah and her daughter are black, the daughter, Peola, has skin so light that it passes for white and she eventually abandons her mother so that she can live as a white woman and enjoy all of the advantages that white women experienced in America during the 1920s. (And this is despite the fact that her own mother is a successful businesswoman in her own right, which, sadly, the daughter cannot see.)

Although a little dull in places, this book was such an important one in its time, that I am surprised that it is not better remembered or treated with higher regard. For anyone with an interest in feminism, this is well worth a read, though it needs to be examined within the confines of its social and historical context.