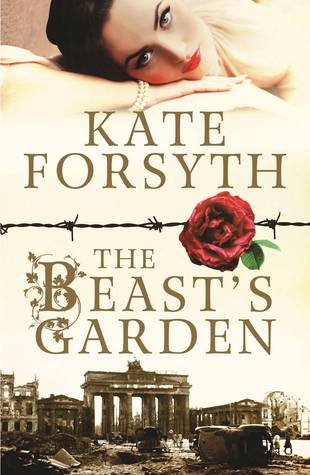 Australian author Kate Forsyth takes the story of Beauty and the Beast and makes it massively original by setting it in World War Two Germany. Ava is the Beauty--an innocent young woman with a beautiful voice who marries a well-respected member of the Nazi party in order to help her family. Leo is the Beast, the member of the Nazi party, the latter as we know being responsible for many horrific crimes. But just as in the tale of Beauty and the Beast nothing is quite as it appears on the surface for these two young people and both are secretly conspiring against the Nazis--Ava as part of an underground resistance movement, while Leo is part of a group who is trying to assassinate Hilter.

The author does not shy away from showcasing much of the brutality that occurred during World War Two in Germany, and the terrible treatment of the Jewish population and anyone else who happened to get in the way of the Nazi party. The novel is extremely comprehensively researched, and the author demonstrates real empathy for the main characters, all of whom were quite likeable. (Though Jutta took some getting used to.) I was a bit skeptical and was not sure that I was enjoying the book or that I would even want to continue to read it, until I got about one hundred pages in the plot began to take shape. From there the tension grew and I started to want more. By the end of the book, reading about Ava's daring attempts to rescue Leo (would she make it in time,) I was completely and utterly hooked.