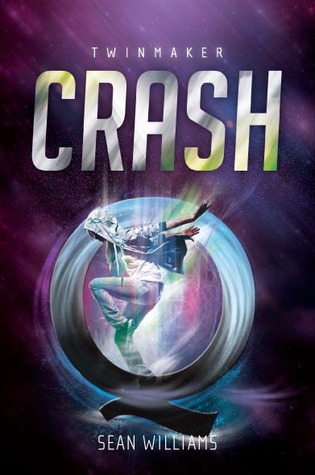 Just as action-packed as its predecessor Crash (published outside of Australia as Crashland,) opens directly where the events of Jump (or Twinmaker) left off. Clair has betrayed her friend Q (an AI with some very humanlike qualities,) and the D-Mat network (a teleportation operation system, similar to what was used on Star Trek) is broken, leaving many people around the world stranded. A number of groups with conflicting philosophies want to work with Clair, and the peacekeepers want to use her to track down Q who may hold the key to fixing the d-mat network. There are a number of dupes who want her killed. And then, of course, there is Clair's budding relationship with abstainer Jesse. But who can Clair really trust?

As I said, this one is just as action-packed as the first book in the series. The narrative is a little confusing at times as Clair tries to navigate her way safely through this new world and attempts to track down Q. The answer to who is responsible for most of the drama is a surprising, though fitting, one. Clair is a resourceful heroine, but she also has many humanlike qualities that give the character a real sense of balance. I would have liked to have seen a bit more of Jesse--as a character who has abstained from the technology in the book, he felt to me as a reader to be a bit of a link between the real world and the futuristic world that is depicted in the series. Or maybe that's just me.

One element of the book that absolutely deserves more discussion is Q. Q is six day old Artificial Intelligence with some very humanlike qualities--Q has a gender and an emotional range that causes her to spend most of the novel sulking and refusing to answer Clair's repeated calls for help. As one of the characters notes about Q, she is smarter than the characters in the book, but what keeps her at their level is her inexperience. (She is, after all, just six days old.) And Q is, of course, the real reason why so many groups are interested in Clair. Whoever can reach out to Q--or possibly control her--is the person who holds all the power.

Crash was an enjoyable read and I highly recommend this series to anyone who is looking for a Sci-fi book with young, resourceful and realistic characters, and a read that does not rely on the usual YA/mass market tropes.