September 03, 2014
Welcome to Writers on Wednesday. This week I have with me M. R. Cosby a fellow Aussie and author of the recently released Dying Embers ... 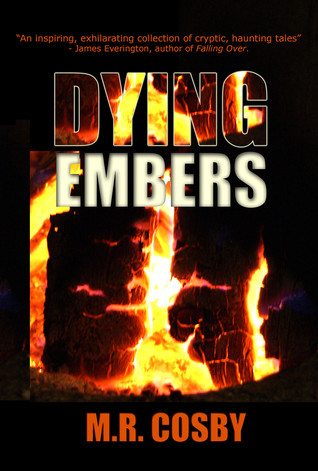 I write short, dark fiction – mostly interpreting my own experience, and from my dreams. I try to find the strangeness in the everyday, and to expose the gaps that people unwittingly find themselves slipping through.

I started writing in order to capture something of myself, to set it down and to make it permanent. My father died when I was young, and I know almost nothing about him. I don’t even have an example of his handwriting, and I often wonder at how so little of him lives on. I didn’t want to risk the same thing happening with my own children, hence an attempt to write my memoirs. From this effort came some rather autobiographical tales which, collectively, became Dying Embers.

Tell us about your most recently published book ...

Dying Embers is a collection of ten short stories, published by Satalyte Publishing. These are tales of Aickmanesque urban strangeness, exploring what is heard around the dying embers of the fire, once the heat has almost gone:

An historic building holds the key to a terrible secret from Letherby's youth. A passenger on an international flight finds out that he is not master of his own destiny – finding out who is, though, is quite another matter. Rural Australia proves less welcoming than Preston had hoped, forcing him to confront the guilt from his past. Pocock witnesses something calamitous on the river bank which changes the course of his life. The alien landscape of a network of warehouses provides the background to a remarkable transformation. An ill-fated property search leads first to admission, then to a strange form of retribution, and ultimately to a terrifying reunion.

“A fascinating and eclectic collection of strange adventures…” James Everington, author of Falling Over.

“These are powerful, energetically written tales that are some of the finest I’ve read in the genre of dark fiction. The language is wonderfully imaginative and instantly thrusts the reader into the realms of slowly revealed decay. A must-read!” Paul Hodge, Freaky Folk Tales

Tell us about the first time you were published ...

Jessica Grace Coleman was kind enough to include some of my early short stories in her Darker Times anthologies. I think I was in the first one, back in 2012, and also the third one. It was an important moment for me, seeing my work in print for the first time. It suggested there might be an audience for my stories beyond interested friends and family members!

Without doubt the publication of Dying Embers. I feel very proud to have my first collection of short stories “out there”. Ever since I read my first copy of the Pan horror collections (number 7 I seem to remember) back when I was ten years old, I’ve wanted to write short stories. It’s been a long journey but I’ve got there in the end!

I’m trying to finish a short story for inclusion in an upcoming anthology of “psychological” horror stories, and I’m some way through what may end up being a novel. Or perhaps a collection of short stories, all linked together to form a whole… I’m not sure yet.

Both. I love collecting books (I have thousands, including all of Robert Aickman’s first editions, some of them signed) but I also love my Kindle. Being able to have hundreds of books instantly available, especially when travelling, has changed my life. Interestingly, I don’t find I buy fewer “real” books despite reading so many e-books. In the long term, there’s room for both.

Once again, there’s room for both. Some of the best books I have read recently were self-published (The Other Room, by James Everington, for example, or The Side Effects of the Medication by Lauren James). Of course there are more hits than misses with traditionally published books, but that’s only to be expected. I think indie publishing is very important and should be encouraged. Some form of it must surely be the way of the future.

The Collected Strange Stories by Robert Aickman. Or indeed, any of his short story collections, such as Dark Entries or Cold Hand in Mine. Quite superb, and nothing else like them anywhere.

Well, I would like to say thanks very much for buying Dying Embers and I hope you enjoyed reading it!

Here are the links to buy Dying Embers;