December 18, 2013
Welcome back to Writers on Wednesday. This week we're catching up with the very talented and very, very individual Cameron Trost ... 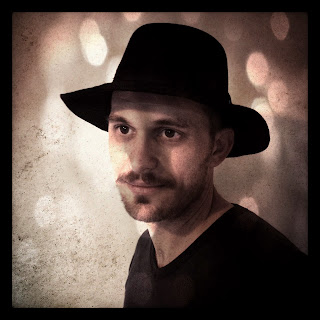 I was born and grew up in Brisbane but live in France with my wife and son. I teach English as a foreign language to scrape in a living and love travelling, history, chess, forests, and rainy weather. My writing is often inspired by my observations of society and human behaviour, which is probably why greed and obsession are two recurrent themes.

“Hoffman’s Creeper and Other Disturbing Tales” is my début short story collection. It features a cast of characters that includes an obsessed botanist, a budding film director, a sleazy hypnotist, a man about to jump off a cliff, and a little boy who gets struck by lightning. The fiction in this collection is thought-provoking, mysterious, creepy, quirky… and always disturbing.

My first published piece was a flash fiction story called “Beneath the Flowers” which appeared in Brimstone Press’ ground-breaking multimedia anthology Black Box 2. It is a glimpse of a couple having a picnic in Normandy. Unfortunately, the anthology is out-of-print, but my contribution is included in “Hoffman’s Creeper and Other Disturbing Tales”.

I have several stories in the works at the moment and wish I had more time to spend on them. Settling into fatherhood and moving back to France are my current priorities – yes, you can expect a lot more tales with a distinctly Gallic edge in future. However, I am slowly doing the fifth – or is it sixth? – draft of my novel-in-progress, an epic tale of urban adventure and social tension set in and under the streets of my hometown, Brisbane. I’m also working on a series of novellas featuring a private investigator who struggles to make a living by using his various talents and great mental acuity to solve strange occurrences. Most importantly of all for me, I have three or four short stories in progress and many more in slush piles all around the English-speaking world. Oh, and at some stage, I need to translate my previously published fiction into French.

In a lighthouse overlooking a Breton fishing village – preferably at night… during a windstorm… with a bottle of scotch at hand.

I love second-hand books, especially smelly ones with surprises like crushed moths and flower buds between the pages… I really don’t know why.

I hate the idea that everybody should read the same book. I think people are ovine enough. Don’t follow the flock. Get out there and make your own discoveries.

Yes, get in touch with me. Tell me which of my tales you’ve read and what you loved or loathed about them. Writing is a solitary art and writers crave feedback.