Why Charlie Brown, Why? 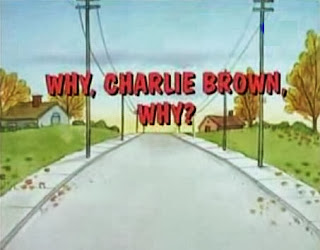 Not all cartoons are made equal. Not all cartoon TV specials are made equal either. Why Charlie Brown, Why? is one of those special ones that stands alone. Made in 1990, Why Charlie Brown, Why? tells the story of Janice, a little girl who is in the same class as Linus and Charlie Brown at school who becomes ill with leukaemia. It was the first time that an animated TV special discussed childhood cancer. It is also one of the most accurate depictions I personally have ever seen of what it is like for a kid to watch helplessly as one of their friends becomes seriously ill. Some of the things Linus experiences while he watches his friend become are so accurate I felt at times that the writers and producers were discussing my own childhood experiences, when, sadly one of my close friends developed cancer. (While my friend, Melanie, or Mel as we used to call her, passed away, Janice's future is much brighter.)

We see Linus as he goes through fear for his friend, a visit to the hospital and his inability to understand how such a terrible thing could happen to anyone. (It is then that he mutters the words, "Why Charlie Brown, Why?") Lucy worries that cancer is contagious. Then we see Janice begin to recover and get teased for her baldness by another child who does not understand about cancer. There is a moment when Linus visits Janice's sisters and discover that they are going through some pretty heavy duty emotions as well--they are jealous of the attention that their sister is receiving, but are also scared for her and feel bad for feeling any jealousy at all--which are quite normal and understandable emotions for kids whose siblings are seriously ill. Janice suffers a relapse but is eventually cured. Her hair grows back (though surprisingly quick,) and she and Linus are able to play on the swings once more. And that is where the episode ends. Oh and we gets to see Snoopy do a few silly things and listen to Sally complain about everything. There are a few goofs in the episode as well--notably Peppermint Patty is show as being in the same class as Linus and Janice, when it is known that she, Marcie and Franklin all attend a different school in the comics. And you get to actually hear grown up voices on the PA at the hospital. And Linus does not mention his blanket. But those are pretty small pay offs for what is a very insightful special. Unsurprisingly, according to wikipedia, the special is often shown in schools and hospitals to help educate kids about childhood cancers.
Peanuts Why Charlie Brown Why?