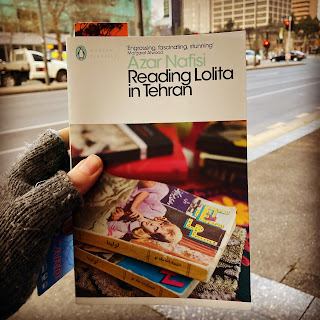 Picture this: Every Thursday morning, inside an ordinary house in Tehran, a group of seven women and one man, overseen by a former university lecturer gather to discuss books that have been banned (or are frowned upon,) in Iran in the years directly following the revolution. That is the surprising true story of Azar Nafisi's memoir. Many names and details have been changed to protect the innocent, but the subject matter--book banning and the lives of the ordinary women (and men,) living in Iran.

The memoir is divided into four sections. Each section is titled with the name of a banned book or author and works as an allegory to describe the conditions in Iran, particularly for women in the late 20th century. There's Lolita, The Great Gatsby, Pride and Prejudice and the author, Henry James. (I suspect that the author loves Henry James best of all.) We learn first hand some of the humiliations the author's friends and members of the group were subject to, such as imprisonment without cause, horrific virginity tests and the impossibility of everyday activities such as dining out with an unrelated man.

I enjoyed this one, even if it is a little heavy going at times. The central argument, that books can offer comfort in the darkest of times is an important one, as too is the fact that Literature has something to say about the human condition--and a lot of it is universal, whether the middle classes in Regency England, or living in Iran in the early 1980s. Although this book was first published in 2003 it has already been reprinted as a Penguin Modern Classic and it is not difficult to see why. Reading Lolita in Tehran really is an excellent book about books.