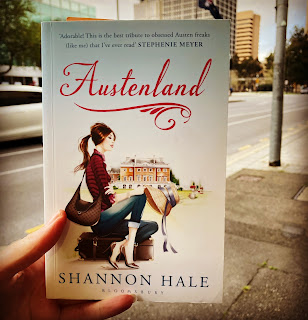 Jane Hayes has a secret. She is infatuated with Mr Darcy. Or, at least, the version of Mr Darcy that is played by Colin Firth in the 1995 BBC adaption of Pride and Prejudice. When her wealthy great-aunt stumbles upon this secret, she takes it upon herself to bequeath Jane an all-expenses paid trip to Austenland, a Jane Austen style theme park where visitors can cosplay as regency era women and live out their Jane Austen fantasies.

It is just a pity that Austenland does not quite meet up to expectations. Jane finds herself in the middle of a miserable holiday. And she's no closer to finding her own Mr Darcy. Or is she?

Austenland is a short and lightweight read. Although the premise sounded fun, this one failed to match my expectations. All of the characters were fairly one dimensional falling into the very good or very bad stereotype, with little to no reasoning for their actions. In fact, even Jane's embarrassment over her interest in Pride and Prejudice seems more pitiful than anything. What is so shameful about watching a BBC production that is enjoyable, well made, won multiple awards and has many, many fans from across the globe? Okay, so she finds a young Colin Firth attractive, more so than the men she's met in real life, but judging by the snippets about her ex-boyfriends that are included at the start of each chapter, one can hardly blame her for that. They all sound like a batch of selfish, one-dimensional duds.

The second problem with the novel is that it tries--and fails--to be witty. After a while, reading about someone's shitty holiday and failed love life becomes extremely tiresome as do most of the other inhabitants of Austenland whose motivations are sketchy at best. Even the romance between Jane and her suitor doesn't quite hit the mark.