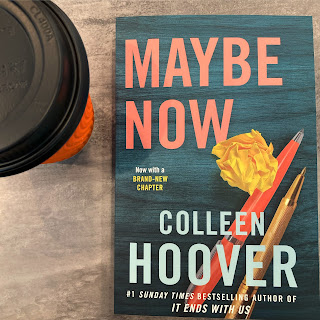 Ahh, Colleen Hoover. Some authors have fan fiction written about them. And some authors write their own fan fiction. Dissatisfied with how the ending of how her 2014 novel Maybe Someday left things up in the air for Maggie, Hoover decided to remedy things first by writing an extra chapter about Maggie and publishing it on the internet. Eventually this led to Maybe Now ...

Maybe now tells the story of what happened to all of the key characters from Maybe Someday and its companion novel Maybe Not after Ridge and Sydney get their happy ending. While the pair are finally free to be together, that relationship has come at a cost. Maggie has a chronic illness and is alone in the world. It's a good thing that she likes her independence. And then along comes Jake, a sexy doctor with a heart of gold ...

If I could describe this story as anything, it would be, "what happens after the happily ever after and the reader turns the last page." Much like fan fiction, Hoover addresses all of the questions and what ifs that can often be there after a novel ends. The path she chooses for her characters is satisfying. The novel itself is very lightweight, and makes for an easy read, the kind of book that is quite enjoyable to read between big reads.