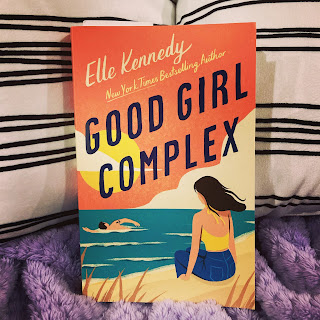 Reminiscent of After by Anna Todd Good Girl Complex is a story of a nice girl who meets a bad boy. Mackenzie, or Mac as she prefers to be known, has just started college after taking a year off to start her own, very successful online business. A wealthy but sheltered daughter of a politician and a socialite, Mac has always played by the rules and lived a charmed life. She's gained the attention of a cute boy from an equally wealthy family and she has no reason to question her life ... until she chances upon bad boy Cooper at a local bar. Unbeknownst to Mac, Cooper has a score to settle with Mac's boyfriend, and as far as he and his friends are concerned, the best way to do that is to steal Mac away from him. Soon, there's a bet on that Cooper can seduce Mac. But what happens when Cooper falls for Mac instead?

What follows is a bit of light weekend reading. The scenario is entertaining enough, the romance gets delightfully heated at times and there are some amusing and occasionally heartbreaking situations. The author does her best to create characters that the reader can identify with. The novel's only real is in its similarity to another well-known book in the same genre. But that said, the author has taken the time to create characters who are a bit more likeable than those in After which I really appreciate.