Review: After by Anna Todd 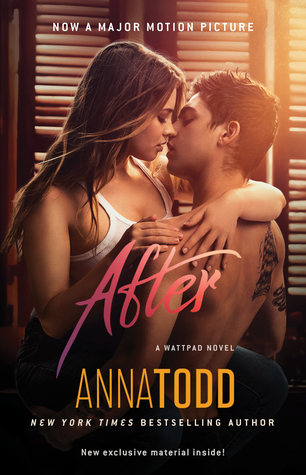 Sometimes, it can be the strangest ideas that have the biggest impact.

Some years ago, One Direction fan, Anna Todd, became intrigued by a particular type of One Direction fan art that started popping up on the internet, art which, bizarrely, gave the mostly clean cut band members a punk makeover. Todd decided to take the concept a step further, and turned to Wattpad, where she began to publish a One Direction Fan Fiction that starred Harry Styles as a tattooed bad boy who was attending college in the United States, where he encounters Tessa, a sweet and innocent young woman who is away from home for the first time.

The result? Todd's story racked up more than a billion hits, making it the most successful story to ever appear on Wattpad. An offer of publication--with the names of the band members changed--was made by Simon and Schuster.

The result of that?

A five book series, a two-book spin off and plenty of weeks on the New York Times Bestseller List. And, of course, a movie deal. (After was released in the United States earlier this year, and in Australia in July.)

A few years ago, I read after and reviewed it on this blog, dismissing it as more rubbish that had been published in the wake of Fifty Shades of Grey. And, fair enough, its faults are many. The writing is a long, long way from perfect. And Hardin, as the male lead is now known, is a complete arsehole, Tessa is a fool to be with him and that twist at the end is just cruel. For a long time now, I've wondered why on earth this book was so popular.

And so, when I found a film-tie edition going cheap, I decided to revisit it.

This is what I discovered.

After isn't a perfect book. However, there is something strangely addictive about this story, about sweet and innocent Tessa who wants so desperately to break free from her controlling mother, only to find herself at the whims of a bad boy. The relationship is toxic. Hardin is an emotional abuser. But there is something about the main character's innocence that feels a little bit relatable. The narrative doesn't require much thought--most of the characters are pretty flat, from bad girls Steph and Molly to nice guy Landon and Noah, the clean cut boyfriend from home that Tessa doesn't really love. But the story is also entertaining, easy to follow and it takes readers on one hell of an emotional roller-coaster as we wonder what is in store for this unlikely and toxic relationship. It's one of those things that I would hate to see played out in real life, but as far as a book with cliffhanger chapters goes, it's bloody entertaining. And that scene at the lake is smoking hot.

After was a story made up of many things that I should have objected to. But, as I said at the beginning of this review, sometimes it can be the strangest ideas that have the most impact. And that theory certainly holds true when it comes to this book.
After Anna Todd