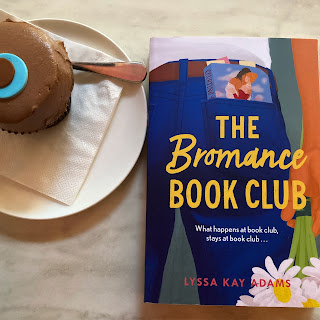 What a lot of fun this light hearted romance about a group of macho male baseball players who have a book club turned out to be. Gavin Scott's life is in ruins. Sure, he might be a top baseball player, but what does that matter when his marriage is not only breaking down, but it turns out that his wife has been faking it in bed the whole time. Now he's been pushed out of the house and Thea's bratty sister is foiling every one of his genuine and heartfelt attempts at reconciliation. (Along with making it difficult for him to see his twin daughters.) Then and teammate introduces him to a book club for men--where they read romance novels and try to find very real and useful ways to help one another fix their relationship troubles. Can Gavin save his marriage? Or is it already gone?

I loved the concept of this one. That said, I have to be totally honest and admit that I was very ready to give this book up after a couple of chapters. Although the situation is intended to be amusing, some of the characters, such as Thea's sister Liv, come across as infuriating, rather than amusing. (And speaking of, what kind of spineless fucking idiot allows their sister to interfere that much in a marriage that is already on the rocks, especially when the said sister does not know all of the details? It's a marriage, not a faulty toaster that broke down two days after the warranty expired.) As is often the case with American novels in this genre, everything feels a little too exaggerated, a little too insensitive, a little too obvious. And, of course, there is the obligator vomit joke. (We get it. Romances have people vomiting in them now.) Once the plot started to move along, the story started to grow on me. I loved seeing how Gavin and Thea worked things out by asserting themselves more and more, and how that lead to some (genuinely) funny moments.

It also seems that this novel is the first in a series about the members of the book club, but as the second novel stars a (supposedly reformed) Liv and one of the more irritating male characters from the book, I'll probably give it a miss.

Overall, while it wasn't the perfect read for me, there was still lots of fun and lighthearted moments.

I'd probably recommend this one to people who enjoy authors like Christina Lauren and Colleen Hoover.