Review: The Age of Innocence by Edith Wharton 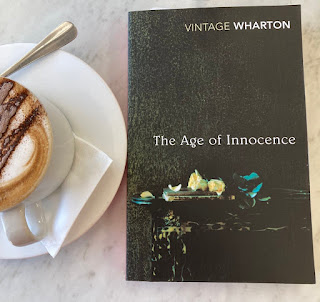 I first encountered the Age of Innocence as a nineteen year old university student, when it was a set text for one of my English Lit classes. At the time, many of the nuances that appear in the novel passed me by and--until I reached the final chapters--it appeared to be the straightforward story of a pompous man who gets engaged to one woman, promptly falls in love with her cousin and marries the first one just so that he and both of the women in his life can suffer. It wasn't until I got to the end, and I saw that May was just as bad as her husband, that I realised what the book was about.

Archer Newland is a young man in a position of privilege in New York in 1870. He comes from old money, has a respectable job as a lawyer and has recently become engaged to May, a girl from the same social circles as his own. On the surface, it is a good match. They both come from similar wealthy families. While Newland has enjoyed the kind of bachelorhood offered to men in his position, where he has discreetly indulged in affairs with married women, May has lived a sheltered life. And then May's unconventional cousin Ellen comes to town ...

More that a story of a privileged male caught between two women, this is a story of how the expectations of others can lead not only to personal unhappiness, but how it can harm the lives of those around them. Initially an innocent, May becomes scheming and underhand as her marriage progresses, Ellen does the right thing by everyone and suffers the most and Archer Newland gets stuck with a marriage that is based on duty, rather than love. There is some optimism toward the end, suggesting that the conventions in New York are becoming less and less restrictive but as for Newland ... well, he's so stuck in the past that he travels to Europe and stays outside while his son goes upstairs to visit poor Ellen.

Although technically well written and a worthy winner of the Pulitzer Prize, I cannot say that this was a favourite of mine, or that I enjoyed reading it more the second time around. It has its story, it tells it well and doesn't have quite enough impact for me to love it or to loathe it. It is what it is.

Edith Wharton The Age of Innocence