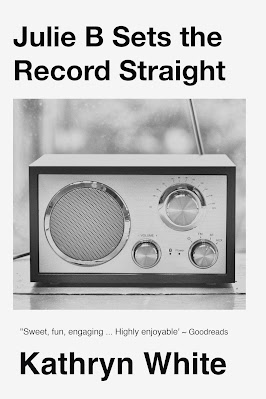 Every now and again the temptation to go back, revisit and revive some of my past work becomes just that bit too much. And out of all of my short stories there was one that desperately needed a new cover. And about 2500 extra words as it turned out.
Julie B Sets the Record Straight is a short story about about a radio host who finds herself having to interview a musician who, she believes, quoted her teenage self in one of his hit songs, and made a lot of money from her words. Of course, Julie has no proof that he did this and the probability, that an internationally famous rock star somehow managed to overhear a conversation that the then fifteen-year-old Julie had with her sisters as she walked home from school is absolutely, mind-blowingly minuscule. And yet Julie cannot shake the feeling that she is right, which leads to a very well, unusual situation in the studio.
I wrote the original back in 2019 over the course of a rainy weekend. The concept of mistaken song lyrics was very loosely based on a true story from my late teens. I took the story of an awkward teenage moment and through the lens of fiction, I was able to create a story that was one, far more entertaining than anything that has ever happened to me in real life and two, an ending that will (hopefully) hit just the right note. I shared it to a couple of sites where it was made available as a free download, and I moved on to other projects.
So why did I go back and rewrite?
In mid to late 2021 I found myself working on a manuscript where one of the main characters worked in radio. (Without giving too much away, it was about the host of a popular drive time show whose life descends into utter chaos when his wife disappears.) It became necessary to set a couple of scenes at his workplace, which, in turn led me to realise just how little I knew about the realities of working in commercial radio. The more research I did, the more I realised how little I knew.
Around Christmastime, I hit a stumbling block. An unexpected turn of events, ones that were unrelated to the manuscript, meant that I would have a very difficult time if I chose to press on with my research and tell the story in its current form. Eventually, I made the tough decision to forget the story write off my research and early drafts as collateral damage and work on other projects. It sucked, I was and I still am furious about this, but that's life. You don't get to pick and choose the things that happen to you.
But that still doesn't explain why I rewrote Julie B.
A couple of months ago, I found myself idly scrolling through Instagram on my lunch break when I saw a sponsored post advertising a new breakfast show that was launching on a very popular local community radio station. Awesome, I thought as I double tapped the post. These people are doing so well. Then it occurred to me just how hard work and passion goes into working in community radio, not just for the hosts but for everyone, all unpaid volunteers, who work together to make it all happen for the love of it. And that radio in general is filled with people who are hard working and passionate about their jobs.
Around the same time I received one of those emails that a certain type of reader likes to send me, the kind that points out every typo (and a few more perceived typos, thanks to the differences between American and Australian English,) that appears in Julie B Sets the Record Straight. (For the record, I find these both infuriating and helpful.) For stories like this one that are free downloads, the fix isn't that difficult. I go back to the original document, correct the offending error, and upload the new version. This time around, I decided to give Julie B a complete re-read. As I read through the manuscript very, very carefully. I discovered a few things.
It was a wholly inaccurate, and ignorant, portrayal of anything that happens inside an Australian commercial radio station. Although, if I'm going to be honest, it probably still is, in spite of the fact that when I was rewriting Julie B I had a bit more research at my disposal. The difference is this time around, rather than using it as a convenient setting, I tried to hint at the hard work that goes on behind the scenes, the cut-throat nature of the industry and to make Julie a bit less smug about her job by adding a dash of imposter syndrome. (I have no idea if imposter syndrome is a thing in radio, but it's something writers like me know a heck of a lot about.)
Anyway, the updated version should be available now, or very soon in all of the usual places--Smashwords, Apple Books, Kobo, Barnes and Noble. I hope you like it.