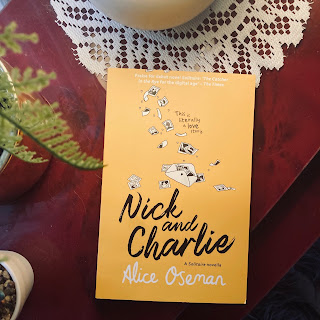 This short novella concludes the story of Nick and Charlie (well, for now at least,) who readers will know from Alice Oseman's novel Solitare, and also through Heartstopper, her bestselling series of graphic novels. It's the end of the school year, and that means that Nick is about to graduate. He's looking forward to starting university in Leeds in September, and life is looking up. That is, until Charlie, who still has another year of high school, starts to have doubts about their relationship--after all, long term relationships rarely work out. Do Nick and Charlie really have what it takes?

It might take the unthinkable--the otherwise solid pair breaking up after a silly argument--to find out.

This was a sweet little novella that looks at what happens in a teenage relationship when one partner finishes school, leaving the other, slightly younger one behind. In adult terms, a year isn't that much difference. At school, a year isn't that much difference either. But when the people involved hit that transition time, it can feel as though they are a whole world apart.

This one is very short, and includes some illustrations. Although the story itself was quite sweet, I do have a bit of a problem with the way parts of this relationship were depicted to the reader. In places--especially in the illustrations--it comes a little too close to fetishising the relationship, which cheapens the story.

Nick and Charlie is short enough to be read in a single sitting and will probably be loved by anyone who enjoyed the Heartstopper series.