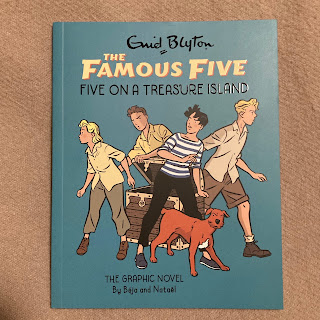 Finally, Enid Blyton's classic and most beloved series gets the graphic novel treatment. Adapted and illustrated by Beja and Natael, this one depicts the very first Famous Five adventure where the three Barnard siblings--Julian, Dick and Anne, meet their cousin George 'not Georgina' Kirrin for the first time, along with Timmy the Dog. And soon, they find themselves on an adventure involving crooks and long lost treasure ...
This was a lot of good, nostalgic fun. Much of the nostalgic elements of the story are kept--it is still very obviously the 1950s or thereabouts--but most of the problematic elements of the series are gone. (Blyton was, unfortunately, something of a white, upper middle class snob and unfortunately those attitudes leaked into her work.) The graphic novel is mostly concerned with recreating most of the action packed scenes of the story--most of the bits about how the cousins slowly become friends is glossed over, though the story of how George is secretly keeping Timmy remains intact. Uncle Quentin's life as a nutty scientist is also kept firmly in the background. (Then again, Blyton herself only ever used it as a plot device to get the five out of the house and off on another rollicking adventure.) The drawings themselves have a strong European influence about them, and reminded me somewhat of Tin Tin. (Though I also don't quite understand why the Barnards were all wearing identical outfits.)
Overall, lots of fun.
Recommended.
Beja Enid Blyton Five on a Treasure Island Five on a Treasure Island: The Graphic Novel Natael