Review: The Art of Asking by Amanda Palmer 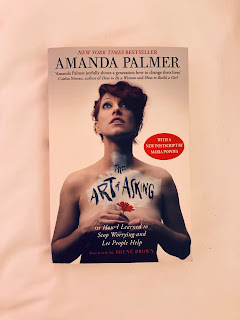 A few weeks ago, I was intrigued when I discovered that musician Amanda Palmer was to be the Writer in Residence for Substack. I read the first column (which you can find here) and two things absolutely blew me away. The openness of the column, and the deep and very real sense of community that could be found in the comments. Through the column, I also learned that Amanda had written a book about ten years ago that was one part manifesto and one part memoir. I immediately wanted to read it.

I've known of Amanda Palmer for a long time. I can remember hearing her band, the Dresden Dolls on Triple J back in the day, and getting a little bit excited when their song Coin Operated Boy made Triple J's Hottest 100 and was included on that years Hottest 100 CD, which I still own but, frustratingly, I haven't been able to find these past couple of weeks. I remember feeling impressed when I learned that she was married to one of my favourite authors, Neil Gaiman. And more recently, I discovered the song she wrote about Judy Blume who is one of my favourite childhood authors, but perhaps I ought to write a separate post on that ...

The Art of Asking was published in 2014. Obviously, it is a book about making oneself vulnerable by being willing to ask for help, even when it seems like that may be the hardest thing in the world to do. It's also a beautifully intimate account of human connection--the way that Amanda has connected with her fans and her art is nothing short of amazing. I found the account of finding human connection--whether it be during her stint as The Bride, a moving statue how gifted those who dropped money in her hat a flower--or during her enormously successful Kickstarter campaign where the fans and donors were very much a part of a community making things happen. There's also a bit on how she struggled to accept to ask for help from the people that she cares about the most and how she found a way to break those barriers down.

This was an absolutely fascinating read. Warm, intimate and heartfelt. It challenged a few of my perceptions about human connection in a way that I found extremely helpful, and that I hope to put to use in the future.

Amanda Palmer The Art of Asking