Review: It's in His Kiss by Julia Quinn 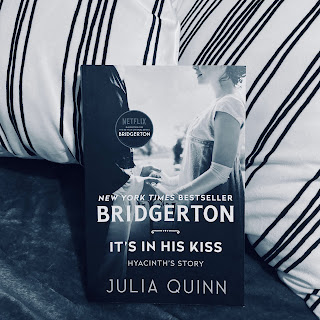 The seventh Bridgerton novel is the story of outspoken youngest Bridgerton Hyacinth and her unlikely match with Gareth St Clair ... whom she meets at the annual Smythe-Smith musicale and with whom she finds herself on a surprising adventure, which involves translating a diary from Italian to English and searching for some most valuable, but hidden, family heirlooms.

I have to admit, I was hesitant going in to this one. Of all of the Bridgerton siblings, I've found Hyancith to be the most annoying. Bratty, outspoken and getting in the way just when the story is starting to get interesting. And the character is, indeed, all of those things and remains so in this novel. It's just that she happens to find a perfect match in Gareth St Clair, a man with a tragic past who I just wanted to see win, especially after he was treated so badly by his father. (Who, I am pleased to report gets his come tuppence in every way.) My only real complaint about this one is that the ending, well, the one prior to both epilogues, feels rather abrupt.

Overall, a fun read and worthy instalment in this lovely series.

It's In His Kiss Julia Quinn