Review: The World at My Feet by Catherine Isaac 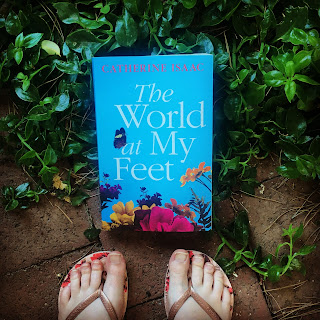 The World at My Feet is a moving tale of one woman's quest to find inner peace. Ellie has not left her home in two years. She has the strangest of dreams. Ellie is doing okay, though. She loves gardening, to the point where she is a very well respected influencer on Instagram and makes money through sponsored posts. And her kind and loving parents live in the main house on the property, while she has made a comfortable home in a flat outside. But when someone new enters her life, he may just be the thing that convinces her to go outside again.

Bit by bit, the novel slowly reveals the extent of Ellie's illness and the horrific experiences that she had to endure. Without giving away too many spoilers, what Ellie endured in the early part of her childhood is based on true events, ones so horrible and that they made headlines across the globe when the story broke.

Catherine Isaac writes Ellie's story with a lot of love and understanding. Less convincing is the character of Guy--it felt too obvious to me from the start that he was taking advantage of her. I felt that there was little need for his character at all, given that Jamie had such a strong presence in the novel already and was the one who gave her the support she needed. It was also surprising that her family tolerated him as much as they did--at least Lucy eventually spoke the truth!

I found the chapters told from Harriet's perspective a little jarring at first, but her story of being an international journalist who becomes personally involved in the story she is working on to be quite compelling.

Overall, a compelling read, one that is only let down ever-so-slightly with the inclusion of a certain male character.

Thank you to Simon and Schuster Australia for my copy of The World at My Feet.

Catherine Isaac The World at My Feet