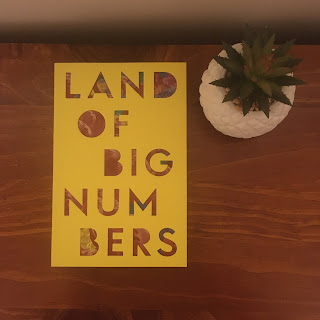 China is a country rich with culture and history. It is also a country that is so very often misunderstood by westerners. In Land of Big Numbers Te-Ping Chen brings to us a selection of stories about what life is truly like for the people that live there, those who have left, or for westerners who have married someone from China. The collection opens with Lulu, a story of a girl whose sense of right and wrong--and her need to speak out--lands her in serious trouble. From there, we move to a story of a government call centre worker who is trying to move on from an abusive relationship, a town whose hopes are inspired by, and then ruined, by a new type of fruit, and an old farmer who dreams of building his own aeroplane, and whose success comes in an unexpected way. And so the collection goes on, bringing as stories of triumph, betrayal and something in between.

What I loved most about this collection is the humanity of it all. These are the stories of the every day, ordinary people of China, who are trying to live the best life they can, in spite of the many obstacles that are thrown their way. Some, like Lulu want to make their country a better and fairer place, others are just trying to exist. Then there are the ones like Cao Cao, who does something extraordinary and wins the awe and respect of everyone around him, but for the party secretary who he wants so desperately to impress. Finally, there is Pan who finds herself stuck at the train station for an extraordinary length of time, in a series of events that would seem impossible to outsiders. Although this is Te-Ping Chen's debut collection, each of the stories have an air of wisdom and polish about them that I would expect from a far more experienced writer.

This is collection is highly recommended to anyone who wants to know what life is truly like for the people of China, past the stereotypes and the headlines that we see in the media.

Land of Big Numbers will be released by Scribner, a literary imprint of Simon and Schuster Australia of 3 March 2021.

Thank you to Simon and Schuster Australia for my copy of Land of Big Numbers.