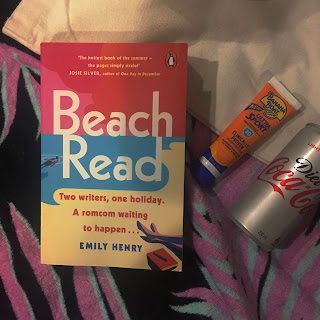 What a delight is Beach Read! In her debut adult contemporary novel, Emily Henry tells the story of January Andrews, a previously sunny and optimistic romance writer whose life is falling apart. January's Dad died six months ago. A secret was revealed at this funeral--that he'd been having an affair with another woman at a beach house that he owned. And now he's left the Beach House to January, who, understandably, is shattered by her father's betrayal and wants nothing more than to clear the house out and put it on the market. Unfortunately, there are three things standing in her way. First, she's homeless and heartbroken after her partner dumped her. Second, her publisher wants her next book by the end of summer and she hasn't started writing it yet. And so, she reluctantly moves in to the beach house and that's where the third thing gets in her way. Her grouchy neighbour is none other than Gus Everett, her mean and pessimistic nemesis from university.

This was such a fun and romantic read. Enemies-to-loves is a common trope, but Emily Henry handles it in a way that is fresh and most important of all, realistic. Gus isn't the kind of enemy who is horrible to January--in fact it's clear from the start that he's a good hearted guy with a very different approach to life. The constant digs the pair have at one another are extremely entertaining, and make for great reading. But where the novel really shines is that the two characters grow and learn, from each other and from various situations and circumstances.

In other words, this is a very well-written romance. I also love the challenge that the pair--bother writers of very different books--gave one another, which felt fun and reasonable realistic.

The mystery surrounding January's father is present within the novel and resolved in a surprising way. The eventual conversation between January and Sonya did not play out anything close to what I expected, though it suits the story well enough, and helps to build toward other revelations toward the end of the novel regarding characters and their complicated personal relationships--in real life, romance is never quite as easy as in January's novels, or as devastating as the ones penned by Gus.

Overall, this is an enjoyable read. Emily Henry is a seasoned novelist, having penned several YA novels including A Million Junes. A second adult novel, People We Meet on Vacation will be released in May 2021.