Review: Zen and the Art of Motorcycle Maintenance by Robert Pirsig 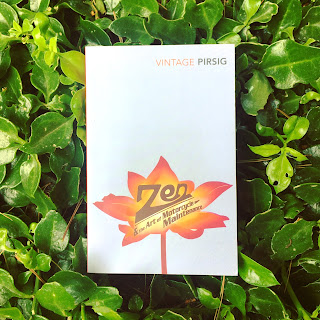 I have probably mentioned Zen and the Art of Motorcycle Maintenance on this blog a time or two before, and if so, I would have relayed an anecdote from my high school years about a teacher who often had a copy of this book with him. (That said, however, memory is often unreliable. I may have only seen him once or twice with the book but it was enough to make an impression on me.) Anyway, the teacher's name was Mr Carlsson. He was a very well liked and well-respected teacher at our school, and on a more personal note, he helped me get my first article published when I was just seventeen years old and in my final year of high school. I was sad to hear that Mr Carlsson had passed away recently, and I found myself, once again, driven to read Zen and the Art of Motorcycle Maintenance. (I had first read this book in 2013, when I was going through a slightly belated quarter life crisis. By then, the book had taken on a strange, almost symbolic and deeply personal quality, a reminder that there had been some good things, and some good teachers, in a school where I had been so desperately unhappy.)

Zen and the Art of Motorcycle Maintenance is not an easy book to review. That is because it is about exactly what it states in the title. It is also about a lot more than that. Then again, maybe it isn't.

The book can be divided into three different things. First, is a fictionalised account of the author and the month-long motorcycle trip that he takes across the United States with his eleven year old son Chris sometime in the mid to late 1960s. Second, it is a story of a man who is relentlessly pursued by the ghost of his former self, this former self the author refers to as Phaedrus, and the narration may or may not be reliable. Third, it is a philosophical meditation on Quality. And the whole thing is linked in with Zen Buddhist Practice and motorcycles, though the author notes at the front that it is not terribly factual on either.

In any case, Zen and the Art of Motorcycle Maintenance is one of those books where what the reader gets out of reading it depends on how much they put in, and how open they are to the concepts and discussions raised by Pirsig. For me, it was a book that I loved in places and found myself nodding my head in agreement in certain sections (such as where Pirsig notes that when people devote themselves fanatically to religion or politics, it usually means that they have doubts,) keen to learn more about Greek philosophers in others, worrying about the level of overthinking that was going on in Phaedrus' head, angry about the treatment of mental health in the 1960s, interested in the journey across the United States, and occasionally confused and having to put the book down to think about something, or to look something else up, and then doubting myself as to whether I truly understood what had been written or if I could communicate it in my review. (Probably not.)

Overall, Zen and the Art of Motorcycle Maintenance is a book that challenged me, and one that I had very different feelings about as I read it the second time around, though I'm still not sure that I truly got parts of, or even all of, this one. It is a book that can only be read, and appreciated, at the right time for the reader. And on that note, it is not at all difficult to why it was so loved when it was released in 1974, an era when the world was going through such huge social change.

Robert Pirsig Zen and the Art of Motorcycle Maintenance