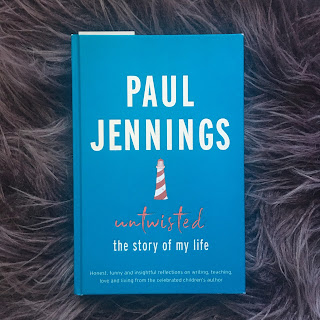 From the moment I learned that beloved Australian author Paul Jennings had released a memoir I was in two minds. On the one hand, this, this was the author who had created Round the Twist, one of the most memorable Australian Television series of all time--and it comes complete with one very catchy theme song. (Discover the theme song here.) On the other, I had two equally solid reasons to pass. The first was that much of the publicity focused on the fact that Jennings had abusive father, and those kinds of discussions--though important--can be very difficult for me to read about. The second was that my initial introduction to Paul Jennings' books wasn't that great. In the late 1980s and early 1990s, Jennings was best known for releasing volumes of short stories with titles like Unreal!--books that belonged squarely in the domain of 'lets make reading cool for kids.' Which, you know, is fine except when I discovered Paul Jennings at age ten, I was already an avid reader. And I thought that his books and their covers were annoying, as though they were trying a bit too hard to make reading seem cool. That same year, I was absolutely mortified when our teacher brought in a brand new copy of Unmentionable to read to the class. Fortunately, the first story she read to us was Ice Maiden and it left me thinking that, maybe, Paul Jennings wasn't so bad after all. It was just a pity that his books had to have such stupid titles, or so I thought.

Then, about a year later, I caught a few episodes of Round the Twist. Older and wiser, something clicked. Jennings was actually a comic genius. And maybe I was the idiot for judging his books by the covers. (Gosh, maybe there is even a good story in there too.) Anyway, I read all of his books until I got too old for them, and I still joke about wunderpants to this day, but I could never quite forgive Jennings for the titles and the covers. And maybe, just maybe, that meant that I wasn't going to be the best person to read, let alone review this latest work. (And maybe I'm not. I have just spent a disproportionate amount of time describing my own experiences with his children's books and television show.)

What I got with Untwisted was a frank and amusing account of the many, many different experiences that have shaped the author and, inevitably, his work. I was absolutely fascinated to learn how the lighthouse setting for Round the Twist came about--at one time, Jennings was a single dad, living in a transportable house on a clifftop that overlooked the sea and his family life during that era influenced the script, which, quite possibly, explains why a television series were so many wonderful and unbelievable things happen, has such a realistic feel to it, and most certainly contributes to the series' success.  Initially, Round the Twist was to have a similar house, but this proved too expensive and lighthouse was chosen instead. And what makes this series all the more remarkable is that Jennings had never worked on a television script before.

But that is just one portion of his memoir.

Equally interesting are his experiences of coming from England to Australia as a boy with his parents and younger sister Ruth. His father was a thoroughly selfish man, and many of the sections that featured Arthur Jennings made my blood boil.

Again, those are just one portion of his memoir. And had those two things make up this book alone, I would have considered it to be a thoroughly interesting and well written behind the scenes look at a beloved Australian author. That it also details his rise to success as an author, and experiences as an author and an account of a thoroughly interesting teaching career--in which Jennings' worked stints teaching students with additional needs and then did two years of teaching at a juvenile detention facility--makes it a must read. Untwisted is an open, honest and utterly readable book about an author and the many different things that influenced him.

This book was read for the Aussie Author Reading Challenge 2020

Paul Jennings Round the Twist Untwisted

LinguaPhiliax said…
When you say the book covers look annoying, I'm assuming you're talking about the later versions with CGI "artwork"? Yes, those covers are extremely in-your-face - I way prefer the earlier hand-drawn illustrated covers of his books. I'm not sure why the publishers decided to change them to those awful CGI ones, and if I hadn't known about the other covers, I think I too would have been put off reading the books.
17 November 2021 at 14:25