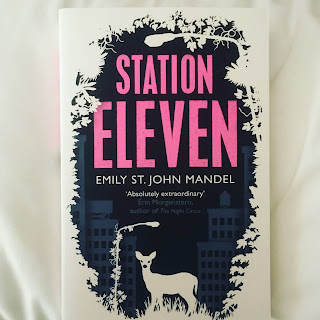 Who would have thought that a novel about the end of the world, published in 2014 would prove to be so prophetic? Station Eleven tells the story of how a deadly flu sweeps the globe, eventually killing ninety-nine percent of the world's population. Okay, we may not be that bad off this time around (I hope) but the story certainly shares some similarities with what happened when COVID-19 became global.

Anyway, in Station Eleven tells stories across a few different timelines--there's Jeevan based in Toronto, who is studying to be a paramedic, who gallantly leaps out of his seat at the theatre and rushes to the stage to save Arthur, an actor who is one of the early victims of the virus. Then there is Kirsten, a child actor in the same play as Arthur who, twenty years later is part of a travelling group of actors and musicians who perform Shakespeare in various small towns across North America. Unsurprisingly, Miranda is a creative woman married to a selfish actor who eventually leaves her for another woman. And then there is Clark, Arthur's most trusted friend who spends the years following the virus in an airport.

Finally, there is the surprising thread, the one other than Arthur, or the virus, that links these characters together. A comic book about the end of the world, written and illustrated by Miranda called Station Eleven. While the comic has a wholly positive effect on Kirsten, for another character the effect is very different ...

Regardless of whether this novel is relevant to our current global pandemic or not, Station Eleven is a well-written book about human tenacity, the ability of survivors like Kirsten and Jeevan to adapt and how small and seemingly unconnected objects and events can have a enormous impact on the future. The author has a real talent for getting into the heads of her characters and writing about them in a way that is emphatic and believable, which is no easy feat, given the number of characters and the timeline that spans across the book. In particular, I found Kirsten a joy to read about, though I enjoyed Jeevan's relatively small part in the novel as well. And Clark is good value. I feel that the authors insight into human nature was spot on, particularly when she was describing Arthur's many relationships, and his continued lack of understanding about Miranda's project, Station Eleven.

This is an excellent read for anyone looking for a book that is intriguing, well written and with a lot to say about humankind. The novel did feel a little long in places, but overall the journey is worth it.