Review: The Greatest Hit by Will Kostakis 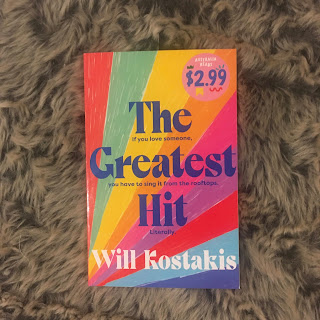 Forming part of the recent Australia Reads promotion, The Greatest Hit is a ripping little short story about a young, first year uni student who encounters her first love, the girl that she hurt back in high school.

When Tessa was fourteen, she recorded a song on YouTube that went viral. Even now, four years later, she's still known as the girl from that video. Which would be fine except that one, it's completely embarrassing and two, what people don't know is that the song, I Love Him was originally I Love Her and was written for Charlie, a girl from her new school who she had slowly fallen in love with. Going back and forth between the past and the present, the reader experiences Tessa's heartbreak at seeing her first love again, and just how her age, and a lack of confidence led to her making a decision that broke Charlie's heart. But, maybe, now that she's older and wiser, she might just have the opportunity to make things right.

This was an enjoyable read with a couple of fun twist. It is a story of choices, mistakes made and lessons learned, and just how vital it is to be true to oneself. It didn't take me long to read--fifteen minutes or thereabouts, but I felt it was just long enough to tell the story.

The ending works perfectly, allowing the reader to decide for themselves what should happen next.

This book was read for the Aussie Author Challenge 2020

The Greatest Hit Will Kostakis