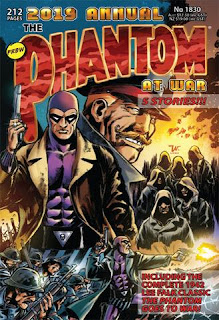 This collection may not be the best starting point for new readers of the Ghost Who Walks (especially if they're not twelve year old boys,) but it rewards old phans (yes, that was intentional,) in bucketloads. For the 2019 annual Frew, the Australian publisher of The Phantom has put together a collection of war themed stories, including the 1942 newspaper serial The Phantom Goes to War. The comic, which is far more brutal than a typical Phantom story, tells the story of how The Phantom and his friends outwit a group of Japanese soldiers who attempt to invade Bangalla. This particular story is popular among hardcore phans and, apparently is the most requested Phantom reprint of all time. (See more here.) Contemporary audiences will make of the story what they will, but it is important to remember the sentiment and the growing unease that was occurring on both sides of the Pacific at the time that the comic was first published.

Three more war themed comics feature in the annual, including a Vietnam War themed story by none other than Paul Mason, who many phans will be familiar with through his work on the Kid Phantom comic. Also included is a replica of what issue 330 would have been, had it been released. (Printing issues at the time meant that issue 330 was never published. Read more here.)

Overall, the annual is enjoyable enough, though it probably has more to offer old phans than new ones.