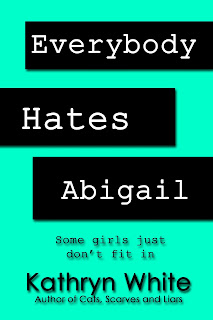 Exciting news! This weekend, I'm relaunching my novel Everybody Hates Abigail, which I quietly took down just after Christmas.

The new edition a bright and shiny new cover and I've listened to feedback and cut out all of the boring bits (well, most of them, anyway.)  For those of you who are unfamiliar with the book, it's about the teenage daughter of a famous rock star who has been sent to live with her auntie and uncle in rural South Australia. She doesn't really fit in there, and things take a turn for the worse when her whole family get implicated in the murder of one of her classmates. Who can she trust? More importantly, can she follow her instincts (which so often lead her astray,) and find the real murderer?

At the moment, Everybody Hates Abigail is available in eBook only. Copies are available from Amazon and Smashwords, with other retailers to follow. If sales are good, a paperback version will follow.

PS If Abigail's name looks familiar to any of you, it's because an older version of the character appears in my novel Being Abigail and my short story Shopping and Lies.
Everybody Hates Abigail