June 11, 2018
Hi Everyone! Today I'm lucky enough to be chatting with author Lavie Tidhar, whose debut children's novel Candy has just been released in the UK. (Australian readers can buy a copy here.) 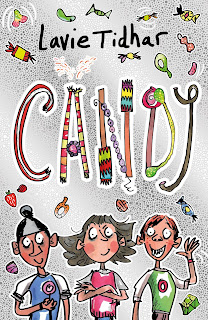 Can you tell us a little about Candy?

Candy is a book about Nelle Faulker, a 12-year old private detective in a city where all chocolate and other candy has been declared illegal. And so now kids are running these candy bootlegging gangs, smuggling chocolate into the city! And Nelle doesn’t really belong in that world, but one day a notorious gangster, Eddie de Menthe (who is also 12), walks into her office (which is her mum’s garden shed) and asks her to find a missing teddy bear. And so this seemingly very innocuous search for a lost teddy kind of leads Nelle deep into the world of candy Prohibition, and ultimately into the mystery of what happened to Mr Farnsworth, the owner of the abandoned chocolate factory up on the hill, who went missing three years earlier… And all the while she runs into bullies and corrupt police detectives and a candy gang war and, of course, a pie fight!

So it’s like Underbelly: Candy! I think that about sums it up...

Not really! I pretty much write these very weird books anyway, so I tend to write them first and foremost for myself, and this was a prime example of that. What I really wanted was to have fun writing it – some of my adult books are, you know, well I think they’re great (but then I would, wouldn’t I!) but they’re not necessarily... fun. And I came off a really tough book to write and I wanted to do something completely different, and so I did! I’m really, really glad it worked out, in that I get to share it with readers and that they might hopefully enjoy it too, but no, it wasn’t any different in terms of the writing. I still worked in a ridiculous amount of sort of hidden jokes and references – anything from The Godfather and The Big Sleep and stuff – to be honest I usually forget what half of them are! – and I had a lot of fun writing this very tongue-in-cheek hardboiled dialogue – I just thought it was funny! But, you know, hopefully underneath that the book also deals with some universal themes, about growing up and coping with loss and bullying, and about the difficulty of doing the right thing, whatever the cost.

I have to ask, what is your favourite type of candy and what would you do if it were banned?

Well, I’m a responsible grownup these days... unless it comes to around 9pm and then the chocolate temptation just takes over, you know? I love chocolate! And candyfloss and meringues and, well, ice-cream... Right, yes, sorry, where was I! I did actually have a job one time selling candyfloss at this big festival when I was a teenager, and I ate enough of it to be put off for a year... But then I liked candyfloss again.

So you know, I think it might not be the worst thing for me if they banned chocolate! But then I’d probably end up turning to the candy gangs for a little taste, just a little taste! And I think it’s interesting the grownups in Candy are split on the issue of Prohibition – you have the health champions, sure, but on the other hand you have the grownups who, even though it’s banned, kind of sneak in a bit of chocolate when no one’s looking. So it’s been kind of an interesting way of taking something that’s pretty silly on the face of it – you know, candy is banned! – and then kind of look at how society reacts to that. It’s kind of a microcosm.

Well, that I hope you enjoy the book! I love having my books out in Australia. I’m a bit of a sucker for Australian TV – I love Underbelly and Jack Irish and, err, even Bikey Wars! And Pizza… remember Fat Pizza? And I have a soft spot for the writer Peter Corris, who did these very hardboiled Australian crime books. I lived on your side of the world for a while – I spent a year on a remote island in Vanuatu, even! – and, you know, I’m not really built for the English cold... I need an excuse to come back! But anyway yes, I hope you enjoy Candy!

Thank you Lavie for taking the time to talk to us. (And I loved Fat Pizza by the way!) I wish you every success with Candy. For readers wanting to know more (and I hope you do,) there is a plot summery and author bio below.

CHARLIE AND THE CHOCOLATE FACTORY meets BUGSY MALONE for 9+ readers.

In a city where candy is a crime and biscuits have been banned, Nelle Faulkner is a 12-year-old private detective looking for her next client. So when a notorious candy gangster asks for her help, Nelle is on the case.

Swept into a secret world of sweet smugglers and chocolate crooks, can Nelle and her friends find a way to take the cake? Or will they come to a sticky end...

Lavie Tidhar is the author of the Jerwood Fiction Uncovered Prize winning and Premio Roma nominee A Man Lies Dreaming (2014), the World Fantasy Award winning Osama (2011) and of the Campbell Award winning and Locus and Clarke Award nominated Central Station (2016). His latest novels are the forthcomingUnholy Land (2018) and first children’s novel Candy (2018). He is the author of many other novels, novellas and short stories.
Candy Lavie Tidhar