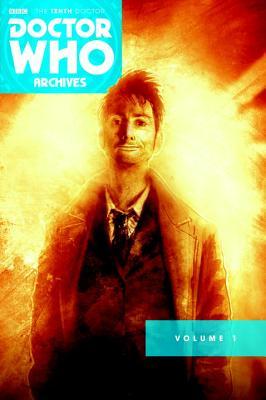 Although I have long been a fan of Doctor Who, I have never read any of the comics. When I found this beautifully presented collection in Dymocks, I decided to change all that and give it a go. I'm glad that I did. The Doctor's adventures translate beautifully in comic book form.

This book features two full length stories, Agent Provocateur and The Forgotten. In Agent Provocateur, we meet the Tenth Doctor and Martha who are going out for a quiet milkshake ... and end up embroiled in a fun but almost nonsensical story featuring an alien who is hell bent on killing off entire alien races and starting a war. The Forgotten is a slower and probably the better story of the two for a reader such as myself who is a bit unfamiliar with the Doctor Who comics. In this adventure, the Tenth Doctor and Martha find themselves in a museum dedicated to the first nine doctors. Meanwhile, the Tenth Doctor is losing his memories and Martha has to help him remember all of the previous versions of himself so that he can survive. Of course, there are a few other sinister things afoot, but to talk about them would give away spoilers. I loved the flashback scenes featuring the other doctors. It was also oddly cool to see Martha again, and with it, a story arc that didn't follow her unrequited love for the Doctor, something which always annoyed me about the character. (She was such a strong, smart woman. Why was she so bent on having a boyfriend?)