Review: The History of Bees by Maja Lunde 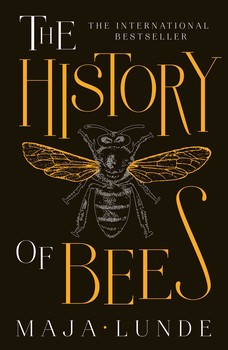 Shaped by three different narratives, set in three different continents during three different eras, The History of Bees is a beautifully written novel that is equally a story of parents and their relationships with their children as it is a dystopian that ponders our future. William is a biologist living in England in 1852, who after a bout of depression decides to work toward something more. Wishing to work with his beloved son Edmund, instead he discovers just how intelligent--and plucky--his daughter Charlotte is. In 2007 in the United States, George comes from a long line of beekeepers and is keen to pass his family heritage on to his only child, Tom, who has other talents and other ideas about his future. In China in 2098 Tao works to pollinate trees by hand--a job that she is massively overqualified for--and hopes to spare her son Wei-Wen from the same fate. Then something very unexpected happens ...

In recent months I've had the pleasure of reading and reviewing a number of excellent titles. The History of Bees is another title that I can proudly add to an ever-growing list of best reads of 2017. Each of the three stories was unique in their own way, though clever formed so that each worked perfectly together to tell the bigger story of the fragile relationship that humans have with nature, especially when we try to control it. There is also the not entirely dissimilar meditation on the relationship that parents have with their children--the hopes that parents have and the eventual realisation that their child is not just like their and their futures cannot be planned or controlled. Maybe it's my gender talking here, but I found the story of Tao and Wei-Wen the easiest to identify with. That said, both William and George (oh, how I hated him in the beginning,) challenged me, and helped me to see the world through a different perspective. I'd really like to talk about the bees more, but there is little that I can say on the subject without offering plot spoilers, and as I really enjoyed the experience of coming in to this book without knowing what to expect, I'd love for other readers to have that same experience.

Thank you to Simon and Schuster Australia for my review copy.

PS I understand that author Maja Lunde will be touring Australia and New Zealand in February & March 2018 and expect to hear more news about this in time.
Maja Lunde The History of Bees