Review: The Delinquents by Criena Rohan 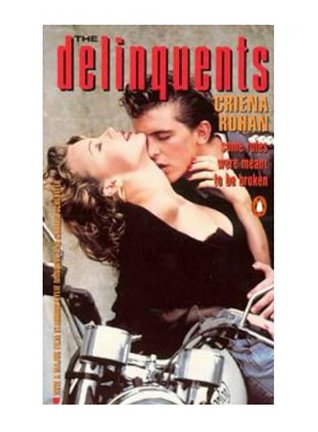 Reading The Delinquents was a lovely reminder of just way I take part in the Aussie Author Challenge every year. This book shook me well out of my comfort zone and took me to a part of Australian history that I knew little about--Brisbane in the years following the Second World War. This was a Brisbane that I knew little of, where trams rolled through its main streets, where the locals were still reeling from the American soldiers that had occupied their city during the war, where the currency was still the pound and where the hardest and edgiest youths were bodgies and widgies. In the middle of all of this are Brownie and Lola, two kids from Bundaburg whose only crime was to fall in love too young. Kept apart by their mothers, and by the state, the pair eventually find one another again and do their best to stay together and survive a tough life in Brisbane, fending off police officers, nasty landlords and a host of other colourful characters.

Before purchasing this book, I was familiar with The Delinquents only because when I eight years old someone made a film of the book. That film became something of a hit at my local primary school (despite it being completely inappropriate for kids,) due to the casting of Kylie Minogue as a surprisingly white incarnation of Lola. (In the book, Lola is of mixed Asian and British heritage, and it is hinted at that she receives greater brutality from police and welfare for this reason.) The book isn't terribly well-known in Australia. After its initial publication in the UK in 1962 it remained out of print until Penguin Books Australia acquired the rights in 1986 (a film tie-in edition was later published in 1989,) and in 2015 it was republished as a Text Classic, along with a number of other forgotten Australian novels.

I found the book itself to be a well-written and at times, a brutal melodrama. Parts of the novel seemed quite rushed, though the reason for this is utterly forgivable. Author Criena Rohan (whose real name is Deirdre Cash,) wrote it from her sick bed at a specialist TB hospital. Sadly, the author had been misdiagnosed, and the underlying cause of her illness--cancer--was not detected until it was too late. She lived just long enough to see The Delinquents published.

While not my favourite Australian novel, this novel certainly shed some light on a part of Brisbane's history that I was unfamiliar with.