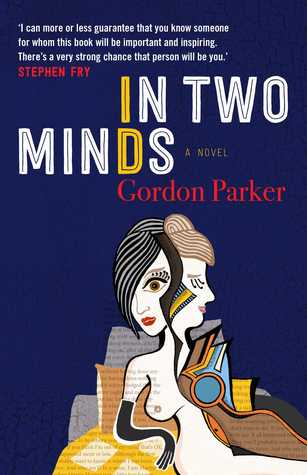 In Two Minds is a detailed and sympathetic account of one man's journey through mental illness, written by renowned psychiatrist Gordon Parker. Martin Homer, known as Sunny to his friends, has a naturally cheerful disposition, despite suffering two great losses during his childhood. He has a good life. Martin is a medical practitioner working and living in Sydney's north shore. His marriage to Sarah is a happy one, though they are childless after a number of failed IVF attempts. However, the death of Martin's mother sends him into a deep depression, which then turns into a period of mania. During this period, Martin encounters Bella, a hurt woman with some pretty serious issues of her own. What happens next has far reaching consequences for them both ...

Although this novel was a little slow in places, there is no doubt that it was written by someone who was an expert in treating mental illness. The author creates a sympathetic picture of Martin, even in the passages when his mania caused him to behave quite badly. Bella was a far more difficult character to digest--she is portrayed as someone who is manipulative and behaves without conscience, yet it is also clear that she has been damaged by her past and has a desperate need to be loved by someone. The description "borderline" is thrown around quite a bit, and other bits and pieces in the narrative point toward Borderline Personality Disorder. I did find parts of the novel quite sexist (the chapter featuring the Trophettes, a support/empowerment group for trophy wives, for example.) That said, the novel is commendable for it's portrayal of Martin. He's 100% human, with a real sense of right and wrong, who behaves the way he does because he is ill, and not because he had any intention to hurt Bella or his wife.

A compelling read for anyone interested in reading about the human side of mental illness. Recommended.

Thank you to Ventura Press for my review copy.