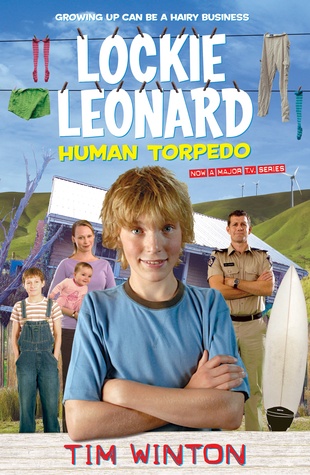 Last week marked the first week that I had officially read Lockie Leonard Human Torpedo from cover to cover, despite the fact that I was assigned to read it in my year nine English class. The first time around, I was fourteen years old, and resentful of the fact that the class had to one, read a book that had a boy as its main character (oh, how dreadful,) and two, that it was a realistic read set in contemporary Australia, rather than well, anywhere else during any other point in history. (Not bad for someone whose later academic career focused exclusively on Australian Literature ... and who included Tim Winton in their English Honours thesis.) Plus the feminist in me was annoyed that some of the other kids in my class kept calling Vicki Streeton a slut, when I felt that she was just as confused about things as Lockie, only in a different way. Consequently, I ended up skipping lots of bits and got a B for my assignment on the book.

I found a copy of Lockie Leonard Human Torpedo at my local secondhand bookstore recently and I decided to read it, properly, this time, and to see what I could make of it. The truth is, it's not a bad book for teens. And I still think it was unfair of the kids in my English class to label Vicki a slut.

Lockie Leonard is almost thirteen years old, is the oldest of three kids and has just moved to a small town in Western Australia, where his dad will be working as the local Sergeant. A bullying incident on his first day of school sees his nether regions covered in Vegemite, and it also leads him to Vicki Streeton, the streetwise daughter of the local used car salesman, who becomes Lockie's first girlfriend. Lockie likes Vicki, a lot, but she's also a bit too keen to grow up, and continually pushes the boundaries of their relationship. The moral to the story is a good one--about letting kids be kids, and the way that Lockie treats Vicki is commendable. There are also a lot of amusing glimpses into surf culture and life in a small town.

I enjoyed this one a lot more than I expected to and will probably hunt down the sequels.

PS Random trivia: Although the specific year is never given, there are several hints that the story is set in 1988--for example the death of a key character on Neighbours is mentioned.

Anonymous said…
I'm in year 7 (12 years old) and my class is doing an essay on it. personally I think its very inappropriate as we are not even teens yet. Our teacher read the book to us including all the yucky scenes and the swear words.
12 September 2021 at 21:28