What Might Happen if the Sorting Hat Vistied Kathryn's Inbox?

March 29, 2017
Every now and again, I like to ponder the unimportant things in life. Like why Cadbury eliminated the coconut ice piece in their 55g Snack bars. (Lucky for me, Cadbury were kind enough to answer.) Anyway, earlier today I started pondering what would happen if the Sorting Hat from the Harry Potter novels made a surprise visit to this blog, and decided to story the characters into some of my novels into the four Hogwarts Houses. Here is what I think the Sorting Hat would choose ... 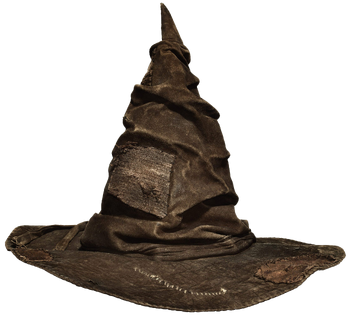 A good Hufflepuff is hard-working, loyal and friendly. Peppa is all of these, or at least she is when she's not grieving for her recently murdered husband. This is probably best demonstrated first through her attempts to save her failing marriage, and later through her choice to speak at her father's funeral, despite all of the terrible things that he had done.

Syltherins tend to be ambitious and resourceful, and Catlin Ryan has both of these qualities in bucket-loads, whether she is pursuing her childhood dream of becoming a famous actor, or, her grown up ambition of becoming a psychologist. In Behind the Scenes we see eighteen year old Catlin rise to the top of her field in a relatively short space of time, while in my upcoming novella One Afternoon* twenty-seven year old Catlin is the head of Psychology at a well respected institution.

This was a difficult choice. Kimmy has more than enough ambition to make it in Slytherin, but if she were given the choice between ambition and loyalty, Kimmy would choose loyalty in a heartbeat. Seemingly prickly on the outside, Kimmy is fiercely loyal to the people that she cares about--she risked her life to look after her sister after she was taken hostage, and she was one of the only people to stand by Tom Arbuckle after her was arrested, risking her reputation and career in the process.


Being Abigail & Everybody Hates Abigail

Samuel is an accomplished journalist, he is intelligent and he is something of a loner, though he certainly knows how to charm people when the need arises. He sometimes allows his career to get in the way of his relationships, and he can be a little arrogant. Samuel could make it in Slytherin, if it wasn't for the fact that he believes wholeheartedly in the causes that he champions through his work. Samuel often works to get an exclusive so that he can report the truth as fairly and as honestly as possible, as he believes that the public deserve nothing less.

Of all my characters, Abigail is the one most likely to give the sorting hat a headache. Abigail lacks the cunning and ambition required for Slytherin, she doesn't work nearly hard enough to make it in Hufflepuff (and her loyalty is a bit questionable as well, just as her ex-boyfriend Jason McAllister.) The question is therefore, does Abigail have the smarts to make it in Ravenclaw, or perhaps, the bravery to make it in Gryffindor?

In both novels, Abigail is shown as being academic, but lacking in common sense. In Everybody Hates Abigail, her Grandfather always adds "Academically, anyway," after describing her as intelligent. We also know that she later pursued an academic career, studying for a PhD in English Literature. Despite this, Abigail seemed to have a limited ability to drive a vehicle, or to understand the difference between taking a medically prescribed sedative and drinking a mug of hot chocolate.

Abigail also stood up what she believed in, and lived her life based upon the causes she supported (for example, she refuses to buy a dishwasher even though she could afford to buy one because she feels that they use too much water and, consequently, are bad for the environment.) She was also brave enough to stand up to Samuel on several occasions, despite the fact that he rarely understood her point of view.

However, many Ravenclaws tend to be quirky, and Abigail certainly has her fair share of quirks, whether it be her bright and colourful clothing, her reaction when her book was voted number twelve in an online poll, or her choice of vehicle.

It's a tough choice, but ... let's face it, if Abigail were given the choice between solving a riddle to enter a common room, or having to remember a password, she'd choose the riddle. Much more fun.

Abigail Carter, you belong in ... RAVENCLAW!

Thanks for reading and playing along. Do you have a favourite character from one of my books? If so, which Hogwarts House would you place them in?
*One Afternoon will be published in late 2017.

** This post is purely for entertainment purposes.
Behind the Scenes Being Abigail Cats Scarves and Liars Everybody Hates Abigail Harry Potter Sorting Hat