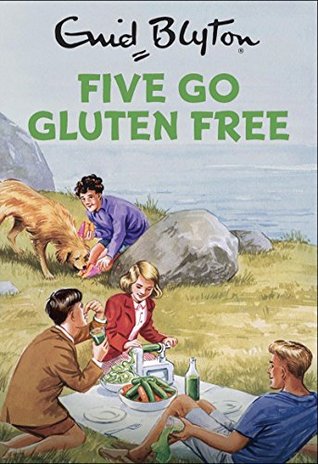 Five Go Gluten Free is a hilarious parody of modern day problems ... staring a slightly grown up version of Enid Blyton's beloved Famous Five who are navigating their way through adulthood and the 21st Century with muddled results. In this adventure, a grown up Anne is inspired to take up a gluten free diet after Dick gives her a new cookbook for her birthday. The others agree to go along with it, and the results are well ... lets just say it turns out that the five are human after all. (Well, four of them. Timmy is still a dog, even though Anne forces the diet on him as well.)

This one is what it is, and it's great fun so long as you go in looking for a few laughs and nothing more. The pictures provide a lovely bit of satire, and other beloved characters from the series find themselves the butt of various jokes--I loved Uncle Quentin's car, which runs on peanuts and could explode at any moment. It never quite meets the benchmark for Famous Five parodies that was set by The Comic Strip Presents in the 1980s, but there are some great moments.

Not a classic, but lots of fun.