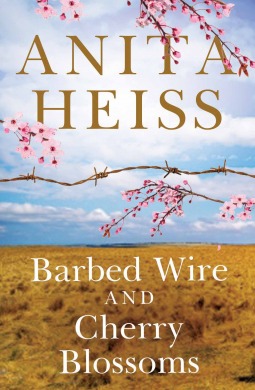 From the moment that I picked up my copy of Barbed Wire and Cherry Blossoms, I was utterly hooked. Not only is it a love story, it's a story set in Australia during World War Two from the perspective of people that this particular part of history often glosses over.

The novel opens with Hiroshi, a Japanese POW living in Australia. Along with many of his fellow prisoners, he manages to escape ... and finds himself alone--and ashamed--in a strange country that he does not understand but knows that he is the enemy. Through chance, he finds himself on Erambie Station, an Aboriginal mission, and he encounters Banjo Williams--a good, honest family man and member of the community, who knows the difference between right and wrong. With the help of his family, and some other members of the community, Banjo helps to hide Hiroshi, sharing what little they have, in a time of war when their people are not recognised as citizens and have few rights. Soon, Banjo's oldest daughter, Mary, finds herself attracted to Hiroshi and the feelings are mutual ...

As I said at the beginning of this review, I was hooked from the moment that I picked up this book. It was interesting to read about an important part of Australian history from two different perspectives. This isn't a story of how men are on the frontline, or how the wives and girlfriends are surviving back home. This is a story of people who barely had any rights, yet were expected to stand up and be patriotic and loyal to a government that had taken their land, their culture and their rights away. I admired the strength of Banjo, a man with a strong moral compass, and who did what he knew was right, rather than what was expected of him. Meanwhile, I found my heart both beating and breaking for Mary, as I watched her love for Hiroshi grow.

Overall, this is a great Australian novel, one that is deserving of every bit of recognition that it gets.