July 24, 2016
On select Sundays I will be reviewing some of the old Apple Paperback titles from my childhood. These titles were published, or republished by Scholastic during the 1980s & 1990s and were written and set in the United States. In Australia, these books were typically only available from libraries or could be ordered through catalogues that were distributed through primary schools. Most of these titles are now long out of print or have been updated and republished for later generations ... 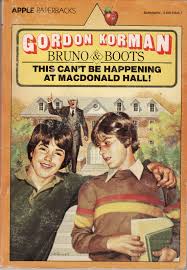 Bruno and Boots are a pair of best mates who attend a boarding school in Canada where they get up to all kinds of mischief, much to the ire of their headmaster Mr Sturgeon, aka The Fish, and much to the amusement of the delinquent girls who attend the neighbouring Miss Scrimmages Finishing School for girls. This Can't be Happening at MacDonald Hall is the first book in the series (not that it really matters,) and tells the story of how the best mates are sent to stay in different dormitories as a punishment after a series of pranks, one of which involves replacing the Canadian flag at the front of the school with that of Malbonia, a fictitious nation made up for the book. The pair of troublemakers find themselves with new, and entirely unsuitable, roommates and conspire to make The Fish change his mind, with some hilarious results.

Amusing and full of situations that are a little bit larger than life, this book stands the test of time--which isn't surprising as it has been republished and reprinted many times since it was originally published by Scholastic in 1978 and is still in print now. Parts of the story had me laughing out loud, particularly the gun toting antics of Miss Scrimmage. Originally, the book was a stand-alone, later it formed the first of the Bruno & Boots series, which was later renamed MacDonald Hall and developed as a television series, while a television movie Bruno & Boots: Go Jump in the Pool debuted recently in Canada. The Canadian setting is also unusual for an Apple Paperback title.

About the author: Gordon Korman was just twelve years old when he wrote the original manuscript for his first novel, This Can't be Happening a MacDonald Hall! He sent it to Scholastic and it was published when he was fourteen years old. Since then, Korman has enjoyed success as both an author and a filmmaker and has been published by Scholastic many, many times. As well as Bruno & Boots, he is also the author of the highly successful Bugs Potter series.
Apple Paperbacks Bruno & Boots Gordon Korman This Can't be Happening at MacDonald Hall!