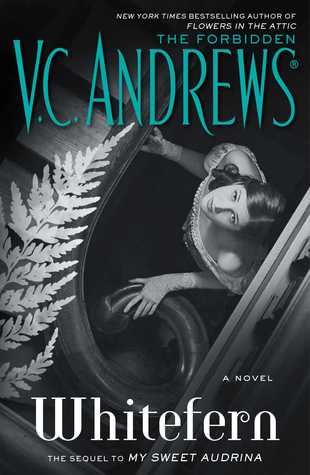 The ending to V.C. Andrews' third novel My Sweet Audrina was always tragically ambiguous. Audrina finally had the chance to leave Whitefern, the grand old mansion that had kept her prisoner since her ninth birthday, and at the last minute, she blew it, believing that a better future may be possible for her and her husband, Arden. This always left me speculating whether it was possible for Audrina to have a happy ending, or if she was indeed cursed to stay and suffer in the house that had kept her, and her memory, prisoner for so many years. Whitefern, the sequel to My Sweet Audrina, is set twelve years after that ending. Penned by long serving V.C. Andrews ghostwriter Andrew Neiderman, Whitefern offers one possible spin on what may have happened to My Sweet Audrina's tragic, titular heroine.

Whitefern opens with the passing of Damian Adare, Audrina's controlling father. A last minute change to his will leaves a fifty one percent share of his business to Audrina (instead of Arden, as originally intended,) leaving Arden infuriated, and causes a greater divide in an already unhappy marriage. Meanwhile, Audrina's sister, Sylvia who has an intellectual disability, has blossomed into a beautiful young woman and a talented artist. The only difficult is that Sylvia keeps babbling nonsense about babies and then it becomes more and more obvious that she is pregnant ... but the question is, who is the father of Sylvia's baby, and is Arden really the nice guy that he made himself out to be all those years ago?

Ghostwriter Andrew Neiderman takes a logical approach to answer the questions about who and what Arden Lowe really is--it's an interesting spin on the character and it does put forward a possibility about the character that I, as a reader, had never contemplated before. That said, the character of Arden conflicts somewhat with the boy who appeared in My Sweet Audrina, the cowardly and torn bystander, who tries to do right, but sometimes acts selfishly and often causes more harm than good. (Think for example, where Arden has an affair with Vera because he truly believes that Audrina is not going to come out of her coma and he believes that he is man enough to save the evil Vera from herself.) Sylvia certainly seems changed, as does her relationship with Damian Adare, who never seemed to care for her much. Audrina herself sounds like a tired housewife who is accustomed to becoming secondary to everyone else, despite once being a young woman who was filled with so much optimism--and so much love for her family--as a child that she was able to forget the darkest parts of her history in order to please her controlling father ... and to keep herself sane.

As always seems to be the case in the recent ghostwriter books (and, I note, is a point that was already raised by VCA superfan Lorraine Elgar on the brilliant Attic Secrets blog,) is there is a certain level of sexual perversion to the book that cheapens the story. Certainly, V.C. Andrews work was melodramatic and never shied away from describing a multitude of taboo subjects whether they be rape, incest or, indeed, sadomasochism, but they were often done in a way that added to the overall Bronte/Dickens inspired gothic feel of the novels. In Whitefern some scenes, such as where Arden rapes his wife as a means of mocking her (and with little consequence,) felt as poorly written and as trashy as they were uncomfortable for me to read.

Although it was interesting to return to Whitefern, this novel feels as though it is centred very much in the real world. It often used logic and the worst parts of human behaviour to explain certain plot twists and it certainly offered some fresh answers to some of the questions that were left unresolved at the end of My Sweet Audrina. Such things are Andrew Neiderman's trademark style--in his own work and that as ghostwriter--and I think as a stand alone novel, this one would have stood up as one of his better recent novels. (So long as one ignores some of the less-than-erotic sexual content.) As a sequel to a book written by another author, it is inevitably going to suffer many comparisons, the most obvious of which are style and setting. My Sweet Audrina was, of course, a gothic inspired fairytale--set in a world that just ever so slightly darker and different from our own. V.C. Andrews seemed to truly understand what it meant to be imprisoned (she was unable to walk, and lived most of her life with her mother, with whom she did not always get along,) and that sense is obvious throughout the book, as is the signature prose, quiet menace and a strange sense of childish innocence, that is nearly always lost or betrayed in some cruel way. Neiderman is, of course, a different writer with his own style, and it is unfair to draw too many comparisons, though ultimately, it is clear that Whitefern and My Sweet Audrina are two very different books, with very different endings and characters who are older and who have changed somewhat. Still, what holds this story together is the sheer love that Audrina has for her sister--which is very true to form. The final confrontation, though  a little rushed, is a fitting tribute to the original.

Ultimately, Whitefern is a book for diehard V.C. Andrews fans, the ones who have always wondered what could have happened next ...

Thank you to Simon and Schuster (USA) and Netgalley for my copy.

Whitefern will be released in the United States on July 26, and should be available in Australia in August 2016.
V.C. Andrews Virginia Andrews Whitefern