October 28, 2015
Welcome back to Writers on Wednesday! This week I have a great interview with Australian author Russell Proctor ... 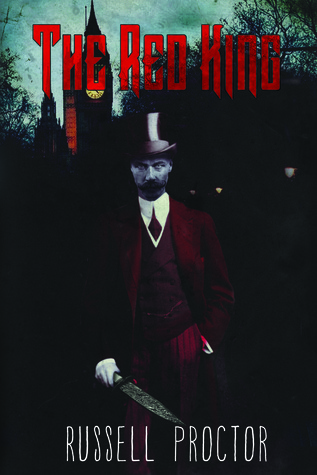 I am an Australian writer, but have also been many other things in my working life, including a lawyer, teacher, professional actor, medical project manager and even a pizza delivery boy (everyone loves to see the pizza boy!) At present I am semi-retired, tutoring school and university students in the evenings and writing during the day. My interests include hiking, astronomy and cats. I have travelled extensively throughout the world, preferring out of the way places to modern civilization, for example I’ve seen Antarctica, walked the Kokoda Track in Papua New Guinea and climbed Mount Kilimanjaro in Africa. I do not describe myself as a thrill-seeker, but certainly prefer my travels to include adventures rather than just “tourist traps”.

I am currently producing a horror/fantasy mash-up series called The Jabberwocky Book about Alice in Wonderland and Dorothy from the Wizard of Oz battling supernatural forces in Edwardian London and New York. The first volume The Red King is out now from Permuted Press; the second volume, An Unkindness of Ravens, is due in December this year and the third, The Looking-Glass House, is scheduled for 2016. I enjoyed writing it, taking the characters invented by two genius writers and forming my own tale about them. The series delves heavily into bibliomancy, the relationship between character and author, and the influence of fictional literature on the real world, while at the same time being a tale of terror and end-of-the-world conflict.

The first time I self-published. It was a science-fiction novel Days of Iron. It is about terrorism 400 years in the future, when the galaxy is ruled by a Syndicate formed after the collapse of the Internet. It was a slow process but an enjoyable one, seeing my words for the first time up in ebook form. Using CreateSapce I also published a paperback version. The book has now been taken up by Permuted Press and released. A sequel, Shepherd Moon, is hopefully out sometime next year as well. I started writing the book when I was 17 years old. It was a very different story then but after 9/11 it changed to being about terrorism and grew from there.

Being published by a legitimate published instead of self-publishing was pretty terrific. I have nothing against self-publishing, but that feeling that someone actually liked you enough not only to want to publish the book but to offer you a contract for a series can’t be beat.

I am finishing up the series about Alice and Dorothy. I have just concluded the sequel to Days of Iron. I have signed up for NaNoWriMo for the first time in order to make a start on a time travel series I’ve had in my head for a while now. I’ve also got some short stories to come out soon from a couple of anthologies and I’ll be focusing on getting some more stories out next year.

I love both, to be honest. Ebooks are handy, and I don’t have to think about what book to take with me on holidays—I just take all of them. Print books still have that appeal of being “legitimate”, if I can use that word, but are bulky and not always convenient. I read both and don’t really care about the medium. It’s the story that’s important.

I have had no experience with traditional publishers, so I can’t comment on them. Indies are good, but not always fast. I’ve had great experiences with Permuted Press but it has occasionally been a wild ride.

My top three favourite authors are Roger Zelazny, Mervyn Peake and William Hope Hodgson. Anything by any of them. Three very different writers, different genres, different styles. But, to me, all so vary haunting and inspirational.