Review: Remembrance of the Daleks by Ben Aaronovich 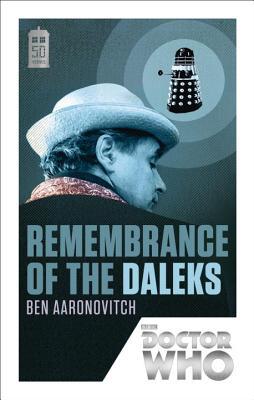 Remembrance of the Daleks is the novelisation of one of the best Classic Doctor Who episodes. Made specifically to celebrate the twenty-fifth anniversary of Doctor Who in 1989 the story has the Doctor, accompanied by Ace, return to Coal Hill School in London in 1963--which is, of course, where the television series began. There is a showdown with some very unusual Daleks, we see a Dalek ascend stairs for the first time and the ending the points very much toward the direction of which the modern day television series would take, some sixteen years later.

The novelisation of all of this is pretty damn good in its own right too. I never knew of its existence until a couple of years ago when it was reprinted to coincide with the fiftieth anniversary of Doctor Who. Although a little pretentious at times, the novel stays faithful to the scrip while adding in its own intelligent edge and spin on the story. We get a little bit more of a sense of Ace's own backstory and the author does well, seamlessly translating scenes from the show onto the page.

An excellent choice for Doctor Who fans, old and new.
Ben Aaronovich Doctor Who Remembrance of the Doctor The Seventh Doctor