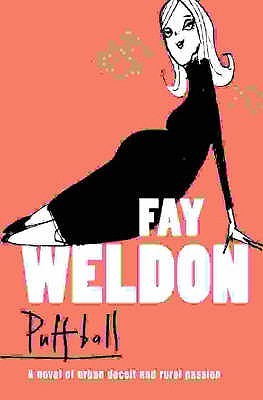 Puffball, the iconic novel by British author Fay Weldon is a deliciously dark comedy about marriage, pregnancy and change. Although it was first published in 1980, many of the themes feel very relevant to modern readers. It tells the story of Liffy and Richard, a young and fairly innocent couple whose lives are thrown into disarray after Liffy decides that they should move to the country. Thanks to the interference of their supposed friends, as well as that of their new neighbours, Liffy soon finds herself pregnant and alone, while Richard is busy trying to bumble his way through his new life--and many new women--in London.

Puffball is not a book for readers who are looking for likeable characters and lovely descriptions of the British countryside. Rather, it is a criticism on human nature--on the often cruel way that women treat one another, while they fight for the attention of men who hardly deserve it. Liffy is a fairly decent character who means well most of the time, even if she is a little naive, and for that reason, all of the other character behave badly toward her. Her friend cheats on her with Richard, Richard's secretary fails to pass messages on and attempts to create more trouble in a marriage that is already going through a rough patch in the hope that she can continue her own affair with Richard, and her friend Helen completely destroys Liffy's London flat and refuses to move out. Then there is Liffy's mother who wants hardly anything to do with her. The worst behaved female, however, is her neighbour, Mabs, who not only encourages her husband to have an affair with Liffy (because she believes that it is inevitable anyway,) and who then practices witchcraft against Liffy with the intention of harming her unborn child. Cleverly, and subtly, Weldon shows how each of the women are jealous of Liffy, though that seems to ease off toward the end as soon as it is clear that Liffy is now a single mother. The male characters, meanwhile, seem to be foolish, interested only in sex and unable to understand the women around them, and not one can accurately see how each women is affected by their actions. As a criticism of human nature, it is a little dark, a little exaggerated and surprisingly funny. There is also some graphic detail about the changes in Liffy's body as her pregnancy develops, suggesting that everyone is taking an extremely personal interest in one woman's pregnancy.

Category: A book published before you were born.