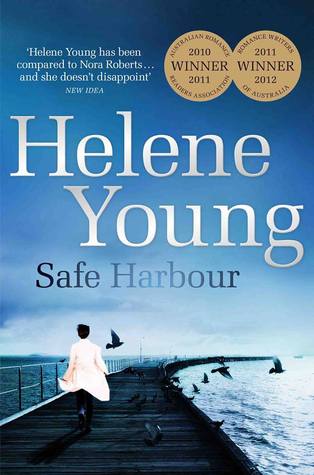 Helene Young is a romantic suspense author who is at the absolute top of her field. Seriously. Take a quick look around some of the most well-respected Australian book review blogs and you'll find an absolute slew of five star reviews, particularly for her 2013 release Half Moon Bay. Young has also won numerous awards from the Australian Romance Readers Association in recent years and (as of March 2014) has an average rating of 4.31 on goodreads. And with all of this to live up to, how does her latest release, Safe Harbour, stack up?

Brilliant, filled with page-turning suspense and with a heroine that I could not help but cheer for. Plenty of the supporting characters, like Rosie are wonderful as well. Definitely a winner.

Safe Harbour opens with Darcy Fletcher, a woman in her early thirties who has returned to the small Queensland town of Banksia Cove after shutting the doors on her pride and joy, a Sydney based restaurant. In Banksia Cove, she hopes to open a new restaurant in the old whaling station with the help of Rosie, a local Aboriginal woman who has been a second mother to her. Darcy's childhood was not always a happy one--she was more or less ignored by her father, coach of the local rugby team who later moved to Sydney to coach professionally and later remarried a much younger woman, and her mother was always a bit distant. When she was seventeen her boyfriend, Grant, drowned and Darcy blames herself for this. It is for this reason that Darcy is willing to volunteer for the local search and rescue in Banksia Cove. One night, she pulls a mysterious solo yatchsman from the water. And, as it turns out, this man holds the key to a number of secrets that will change the lives of Darcy and a number of people that she cares about ...

I found myself reading this one in a relatively short space of time, desperately turning the pages and wanting to know more--not just about Conor, his secrets and how they related to Stirling Fletcher (and Stirling's less-than-stellar way of 'resolving' the issue,)--but of the blossoming romance between Darcy and her childhood friend, local community police officer, Noah. Despite the sometimes fantastic and suspenseful plot, many of the characters felt very human and real to me, particularly Rosie. It was also pleasing to see that Beverley had very real and understandable reasons for her own behaviour. Some parts of the ending are quite sad, though fitting.

Finally, a big shout out to Anna from the Reading Room for my review copy. Thanks.
Helene Young Safe Harbour