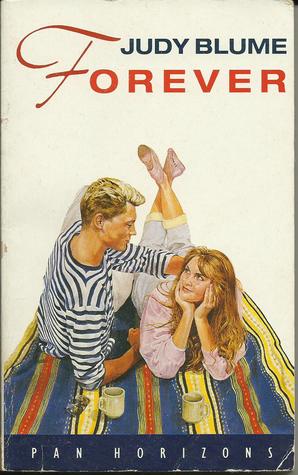 Forever is not intended to be a sparkly, shiny teenage romance where a near-perfect heroine lives happily ever after with her glitter pixie of a boyfriend. And frankly, after reading some of the reviews on goodreads, I'm wondering if some readers actually have any idea what the novel is about or what the authors motivation was for writing it in the first place.

Come on folks. It's Judy Blume. The same legendary author who proudly brought you Iggy's House, Blubber Are You There God? It's Me Margaret, Deenie, Tiger Eyes and Then Again, Maybe I Won't. Her characters don't sparkle, save the world single-handedly or fart unicorns or whatever the big six publishers are going to start pushing to an already over-saturated YA as the next big thing.

What Blume's characters have in abundance is truth. And maybe sometimes truthful writing is difficult to read. Sometimes truth can be even harder to understand and to digest than fiction. But, I do urge some of the younger readers out there who felt annoyed by the characters, or struggled to understand them, to pick it up again and to think about what the author is trying to say. Because in it's own way, Forever is a morality tale and it does ask readers to think about what the concept of forever actually means. (Think about how often Kath misuses the word Forever in the book.)

Forever is an honest novel about a first sexual relationship.

The plot follows something along these lines. Kath and Michael meet at a party. Michael is smitten straight away, Kath likes him but her feelings take a little longer to develop. Over time their relationship becomes more and more sexual. As this happens, Kath believes that she is falling in love and becomes more and more obsessive, believing that Michael is her true love. These feelings grow stronger after she loses her virginity to Michael. Her worried parents watch from the sidelines and insist that Kath spends the summer away from Michael. On her own, and thanks in part to a family event, Kath begins to grow and change as a person, and her feelings for Michael grow less intense. She eventually develops a crush on another person and realises that Michael was just the first of many adult relationships that she will have over the course of her life...

Kath and Michael are very real characters. They make the same mistakes as many of us do when young, mistaking infatuation and sexual desire for something far deeper and longer lasting. Each of the characters has insecurities and quirks. The fact that Michael names his penis Ralph serves to make him all the more human and endearing. And they both make mistakes. But most of all, neither character is anywhere near as selfless or devoted to the other as they imagine.

Forever is a fairly accurate portrayal of two people on the cusp of adulthood (and I say cusp, because they really are not quite there yet mentally or emotionally,) and their developing sexuality. Brilliant, and honest.
Forever Judy Blume

Anonymous said…
I loved Forever as a teen, apart from the juvenile titillation, I feel I learnt a number of valuable lessons from it. In retrospect I also really like that there was none of the fire and brimstone consequences that usually accompanies a teenage girl having sex in fiction - Katherine doesn't fall pregnant, she isn't labelled a slut and she isn't ruined for all time when the relationship doesn't work out. It's a sweet, honest and thoughtful book.
8 March 2014 at 13:55

Kathryn White said…
I agree, it's an honest book. And I agree, the lack of fire and brimstone consequences makes it feel all the more real to me.
8 March 2014 at 14:12