November 27, 2013
This week for Writers on Wednesday the multi-talented author, publisher, indie book store owner and the co-ordinator of the brilliant Australian Writers Rock! website Aishah Macgill gives some brilliant and very unique answers to my questions ... 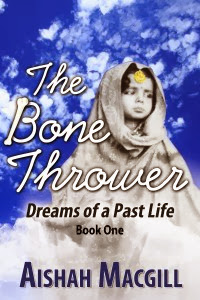 This would be one of the hardest questions of all to answer. I was on an online dating site for a while and I wondered why I only got ninny’s contacting me. Then I realised my profile, that I wrote, made me sound like a twit, so...

I try to live life with honesty, integrity and openness. I just love to write. It’s like an itch I have to scratch, a hunger I must feed. When I think, I am always writing a book in my head or making a movie. When I write a book, I have already written most of it- in my head, but without as much detail. Does anyone else think like that? If you do, my number is...

I have just completed the third book in a trilogy, titled The Bone Seer Paranormal Romance Trilogy. In between the 2nd and 3rd books I wrote another book. I think that was a good thing to do, it gave me some time to reflect and breathing space to ponder where the trilogy was going. The trilogy is an epic story. It touches on the subjects of life after death, the meaning of life, meeting a soul mate again from a past life and my political views of the world.

I thought, it’s my book, so I may as well use my views as the characters viewpoint. I enjoy a bit of political intrigue as well. I was a member of a communist party when I was younger, so I am a bit of an old leftie. I’m certain I have a long forgotten ASIO file somewhere. I’m sure it would contain something like, “a harmless flake, easily misguided and influenced by her more dangerous, commie peers,” or similar. If it was today and I was young, I would be a greenie or a feral, or maybe a feral greenie, the term greenie didn’t exist back in the 1970’s. But some of that old, idealistic fervour and anger, and the desire to make the world a better place still lingers on in my psyche today; and it comes out in the story line of the trilogy.

I also consider myself a ‘seeker of truth’, meaning, a seeker of knowledge and enlightenment. I have a serious interest in traditional styles of meditation and Vedic thought. I love eastern philosophy, particularly Hinduism. I love that their gods and goddesses actually have sex, not like our western dogma, where we attempt to be so puritanical that we can only have a virgin birth. In one Hindu myth, a particular god and goddess are constantly at it up on Mount Kailash in the Tibetan Himalaya, they’re in a cave and it’s their eternal love making that keeps the world going round. And if you interrupt them, as one hapless, curious rishi did, you’ll be burnt to ash with the glance of a third eye.
I have intertwined much of my own philosophy into that of the main character, Isabella Matthews. Only she’s much smarter than me.

I decided to write the trilogy, (though it didn’t start out as one, it was only going to be one book), as I had myself an inexplicable yearning for the love of a man I met many years ago. I couldn’t shake it. I decided to consult a psychic, who told me I had been in love with this man in a past life, that I had been imprisoned and he told me he would rescue me, but he never arrived and I died in jail, wondering why he didn’t fulfilled his promise. She said he had died but nobody told me and that was why I had suffered from these abnormal pangs of want that had no logic. So, I decided to write a novel based on this premise, of love lost and found through lifetimes. I invented the time and place and the circumstances, but I wanted to get across those incredible, but irrational feelings of loss I’ve had to contend with.

My first book was self published on Amazon and I did it all by myself. I struggled to find out how to do it, once I figured it out, then I decided I would start a business doing it for others who struggled as much as I did.

My proudest achievement would be finishing any one of my books. I have a long history of not finishing things and procrastinating. You may never read this interview as I may never actually finish it and submit it to Kathryn.

I am tidying up my trilogy, the 3rd book is currently being edited and will be published on Amazon in a few weeks. Then I have another 20 or so books in mind to write and I will decide which one I will finish first.

I love writing in cafes with good coffee and cheap food. I have a favourite but the owner, I think, is a bit sick of me, so I’ve been spreading my love around town. I write better surrounded by noise, out of the house.

I love both equally. It’s like having two children, each has their own unique quirks and features. I don’t favour one over the other.

I can read quicker on a kindle and they don’t weigh your arms down when you read in bed. You know how books get really heavy after a while and you have to constantly change positions to achieve a comfortable reading pose.

With a paperback, I can flick through the whole book, casually with ease and stop the pages with the press of a finger. Real books are nicer for non fiction, especially if they have pretty pictures.

Hmm, I don’t think there’s one book like that, one for everyone. But Shantaram by Greg Roberts is a fave of the past decade. Before that I would have said anything by Herman Hesse. So anything by Herman Hesse would maybe be closest to that idea, but more the concept of an author that everyone should read. So read at least one of Hesse’s books in your life. I can only imagine what they must be like in German if the translations are still so magical in English.

I’ve only been to Adelaide once, and the water was so terrible, so I feel sorry for you folks. Is it still the same hard water? But I grew up in Horsham, which is not that far from Adelaide by Australian measure, and we shared the same weather patterns. Fuqing really, really hot and really fuqing cold. And Horsham has terrible water too, so we have alot in common actually, only our town water had dead sheep rotting in it. It started as a pristine waterfall in the Grampians, and as it gently meandered through the paddocks toward town, in an open channel, the sheep used to frolic by the banks and fall in and drown, and they were left there. Along with an overdose of pesticides and herbicides sprayed on all the wheat, it was an undrinkable cocktail. Alas, anyone who had blonde hair, it was tinged green with the chlorine. Everyone had tank water to drink though. No one in Horsham is without a tank or two in the backyard. Do Adelaide peeps have tanks too?

In my trilogy, the home town of the main character is Edenhope. People from Adelaide may have actually been to Edenhope, at least once in their life. And in the book, I do mention Adelaide, once.

Thank you Aishah--to answer your question, yes lots of houses in Adelaide has a rainwater tank, though it rarely rains here.

As always, we've got cool links so that you can find out more about Aishah and her work:

PS I am one of the many authors to be included in Aishah's anthology, SoulMate Conversations.
Aishah Macgill The Bone Thrower Writers on Wednesday

Kathryn White said…
I love hearing about the different methods that authors use when coming up with their stories ...
29 November 2013 at 22:18