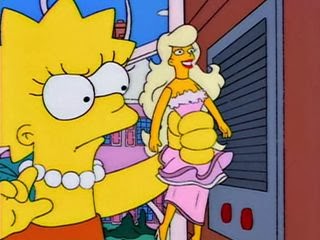 Millions of girls will grow up thinking that this is the right way to act ... that they can never be more than vacuous ninnies whose only goal is to look pretty, land a rich husband, and spend all day on the phone with their equally vacuous friends talking about how damn terrific it is to look pretty and have a rich husband!
~ Lisa Simpson

Today I am paying tribute to one of the most awesome episodes of the long-running animated series The Simpsons. I still remember the first time that I saw this one, though it was almost two years after the original US airdate. I was fourteen years old, had just started year nine at high school and was well, rather unhappy myself. I was the quiet, smart and unpopular kid of my grade. I was the girl who didn't quite fit in, the girl who simply could not see her potential, and who wished desperately that she could be anything other than what she was.

And then I saw Lisa Vs. Malibu Stacey.

To give you a quick recap, this is the episode where Lisa purchases a talking Malibu Stacey doll. She takes the doll home and is quickly disappointed when the doll only says shallow, meaningless things like, "Don't ask me, I'm just a girl." Lisa decides that Malibu Stacey is a poor role model and appeals to Stacey Lovell the disgraced creator of Malibu Stacey who had been fired from the company years before. Together, Lisa and Lovell come up with their own doll that they name Lisa Lionheart who is voiced by Lisa and offers encouraging phrases such as, "Trust in yourself and you can achieve anything." Eventually the doll is trumped by the makers of Malibu Stacey who release a new Malibu Stacey doll with a new hat. Only one girl purchases a doll, but Lisa realises that if she can get through to just one girl, it will all be worth it. Oh, and there is a funny subplot involving grandpa getting a job at Krusty Burger.

Obviously, it's The Simpsons and any kind of message is offered with a big dash of fun satire and at times makes fun of itself, but the episode really spoke to me. What I learned as a kid was that it was okay to be different, to want something more than a new hat and to look at things a bit more carefully. And like just one girl buying Lisa's doll, it didn't really change my world overnight. What it did give me was the strength to keep plodding on ...

Bonus Question: Which is your favourite episode of The Simpsons and why?
1990s Nostalgia The Simpsons

Andrew Leon said…
It's been too long since I've watched the Simpsons to know for certain, but I'd guess the one where Homer time travels, sneezes, and kills all the dinosaurs.
14 November 2013 at 10:01

Andrew Leon said…
Um... I don't remember that. There was a doughnut, but I think it had something to do with the time travelling? I don't know...?

Be watching for an email from me.

Kathryn White said…
I think it started raining donuts at the end of the episode, if I'm thinking of the right one. Perhaps if Simpsons expert Carolyn is around she can confirm this?
14 November 2013 at 11:09

Andrew Leon said…
Oh, you know, I also like the one where Lisa wants to write a book. I think that's the one with Neil Gaiman in it? Can't remember for sure, but that was a good episode.
14 November 2013 at 11:23